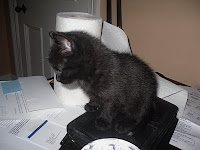 We were supposed to get a light dusting of snow, covering the four inches that we had yesterday. Instead we are getting a blizzard complete with a biting wind. It brings back memories of when I was at Carleton... The puppies are enjoying the snow and chasing the sled when we go sledding. The postman became stuck and could not go further up the bank because the Council had not gotten around to gritting. He predicted more snow and has been proved right.
Day 2 of the new regime and I am finding I have to think and remind myself -- Internet second, writing first which shows how bad my habits are.
With weight management, I have stepped on the scales, and it is not a pretty sight. My sister in her wisdom has suggested to focus on losing 10% in 2010, rather than trying to lose the whole lot. It seems good to me. Once I have done that, then I can look at losing more.

The kittens (as can be seen from Mr Darcy's photo) find my messy desk fascinating.

Posted by Michelle Styles at 12:36 pm

Stepping on the scales always depressed me so I don't do it any more. Last year I focused on how I looked and went down two sizes. I'm aiming to do the same this year as it's clothes shopping that upsets me rather than how heavy I am.

Diets are the bane of our lives aren't they? Especially in this weather when it is so cold and our bodies are crying out for more calories - *sigh*. Hope the blizzard clears soon. Take care. Caroline x

p.s managed to write my 1000 words today before switching on the internet - but boy was it hard!

Happy new year, Michelle. Guess we sent you some of our snow. I'm surprised there was any left by the time it got across the pond.

Good luck with the goals and Mr Darcy is gorgeous.
lx