Resolutions, kittens and a new country for my books

First, next year's resolutions:
1. To be better at time management. This means getting in the habit once again of writing BEFORE I switch the internet on. Rather than just checking to see what is happening. I could be far more productive than I am.
2. To be better at weight management. Given certain health issues, it is going to be imperative that I manage my weight. It appears I am suffering not from repetitive strain, but from lymph oedema. Some people get swollen ankles, I have a swollen forearm. They are still doing tests but the big nasty things have been ruled out. (Apparently a swollen forearm can indicate breast cancer or deep vein thrombosis) It has been a stressful December but I am now officially interesting. Losing weight is supposed to help.
3. With my writing, I want to up my game and continue to work hard at providing the best story possible. So to be better at writing. 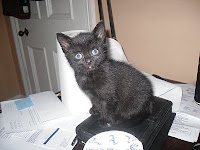 The kittens are growing quickly and are starting to explore. They had great fun on the stairs last night. Rushing up and down. Everyone in the house has been put under notice to keep the toilet lid down etc. There is no excuse when young kittens who are learning to climb are about!
The picture is of Mr Darcy on my desk. He is a cat whi is interested in technology. But he does need to learn that climbing up bare legs is not a good thing.

Finally, thank to my lovely CP, I learnt that Taken by the Viking was in Portugal this month. It is a new language for my books and I am really pleased. The cover is lovely. You can read more here. But the blurb reads:
A amante do viking

Email ThisBlogThis!Share to TwitterShare to FacebookShare to Pinterest
Labels: Taken by The Viking

Glad the nasties have been ruled out.

Good luck with the resolutions. #1 is a really key one. (Internet is wonderful but *such* a time-suck.)

And congrats on being in Portugal!

Shenanigans have been the word around here this morning with the VBC (Very.Bad.Cat.) I drew the line on the chewing of the corner of my new book.

I am with you on the resolutions and ready to kick your butt if need be. CP's are good that way. I have the boot marks on my own butt to prove it!

Your NYR number 1 is also mine! As you can tell I spend too much time on the internet - but oh I do love it!

Have a great New Year and fingers crossed you get rid of that nasty affliction of the forearm.

Have a fantastic New Year Michelle. Hope the arm gets figured out - how awful for you. Good luck with your resolutions!

Best wishes for health and happiness in 2010