Right I have started Level 2 of TAM's continuity and Tracy really does work your legs...and your arms.
Level 1 was a brief and welcome respite. It gave me a chance to learn the new Dance Cardio. It is very much Hippo Dancing 2.0 as my eldest would say but I am enjoying it more.  Tracy continues to work you hard. One of the things I do like is that there is only one of her. You are not looking at advanced and beginner moves. The advancement comes from the new levels and your body is constantly challenged. You don't have to think -- I can't face seeing this particular dvd one more time! Every 10 days the MS changes.


I have started my latest story and am looking back at my notes for Shackled to see if I did anything differently which contributed to its more completed form. The big thing I noticed was that I started with fleshing out the backstory far more rather than going for the appearance. Even though the back story did change a bit, I still was solid on the character's inner values. Knowing the inner value means that you know how the character will react and what is important and why. My deadline is 1 April and s
Posted by Michelle Styles at 12:25 pm No comments:

Shackled to the Viking accepted

My editor phoned yesterday to say that Shackled to the Viking's tweaks were fine and the book has been accepted. She is really going to try for the title. So fingers crossed.
In case anyone was wondering it is a Viking warrior v Anglo Saxon lady tale set in North Yorkshire in 876.
My editor thinks my enjoyment of writing the story showed. And the next story is also supposed to be a simple premise as well so that I can go into greater depth with my characterisation. Sometimes I do get too convuluted for my own good.
Obviously no date for publication yet. I suspect it will sometime in 2013.
It is back to the Victorian era for my next one and thus lots of beautiful dresses. There is just something about a full skirt. My youngest has been dispatched to the Lit and Phil for the fashion books that I use. And I've been busy reading about the Great Exhibition. My deadline is 1 April.
Posted by Michelle Styles at 9:28 am 3 comments:

Email ThisBlogThis!Share to TwitterShare to FacebookShare to Pinterest
Labels: acceptance, shackled to the viking

Friday brought my editor's thoughts on the work-in-progress Shackled to the Viking. My editor has promised to fight for the title so fingers crossed.  Anyway, the revisions were short and sweet. Three minor points of clarification. I finished them and sent the revisions in on Monday.Now fingers crossed that my lovely editor thinks it is enough.
As I wait, I have started my next one (due 1 April -- what was I thinking?) It is a Victorian. It is nice to get back to pretty dresses! One part of my job that I love doing is researching the dresses. Personally I love how the nipped in waists look as opposed to the high Empire/Regency waist. I know other people are just the opposite. What is good that once you do hit the late Georgian period, many more textiles have survived. Trying to discover exactly what people wore in late 9th cnetury is fraught with difficulty.

I found the Georgette Heyer biography interesting. Apparently she didn't believe in women working outside the home and so didn't think it right if her heroines did.

Last Tuesday I started the Tracy Anderson Continuity. It has meant learning a whole new Dance Cardio and I am getting to grips with it on the 7th day. It is the Hippo Dance 2.0 as my eldest son calls it. He was told tough -- I do it for the results, rather than performing in public. The MS work carries on from Meta and I am really trying to focus on the muscles and the cross vectors, the push-pull thing. I had to laugh when the Times was going about Tracy Anderson devotees at the Gloden Globes showing off thier shoulders and lack of bingo wings. My arms have certainly improved. COntinuity has bonus arms with wrist weights. I have just used my ankle weights. As a result of my eldest's complaints I have started doing MS, bonus arms and then 2 lots of the Dance Cardio. It makes more sense and I'm not getting the exhaustion I had when I last tried doing the MS first.  So progress.
Next Thursday my PHS column Secrets of the Fit and Fab begins. It is one thing to lose the weight but it is quite another thing to keep the weight off for any length of time. The column is to keep me motivated as it were.


My eldest two are back at uni and the house is quiet. They both seem settled which is good.

I shall try to be a better blogger as this has had a lower priority as of late.
Posted by Michelle Styles at 1:41 pm 1 comment: 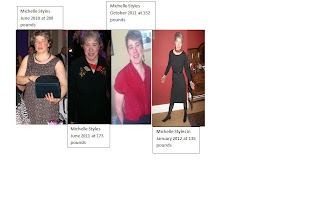 Wishing everyone who reads this a Happy 2012. May the new year bring peace, joy and fulfilment to your life.
My big resolutions are
1. To maintain my weight (this is the first time in a LONG time it has not been to lose more than 20 lbs) There is a terribly sad statistic that the vast majority regain ALL of their weight plus within a year of losing it. That is not going to happen to me!
2. To organise my priorities better and remember that I have only so many creativity apples. If I give them all away, there will be none left for me.
3. To make all my deadlines.