Excerpt for TAMING HIS VIKING WOMAN

Harlequin now provides longer excerpts.
So if you want to read the  full first chapter of TAMING HIS VIKING WOMAN you can do so here

Posted by Michelle Styles at 9:50 am 4 comments: 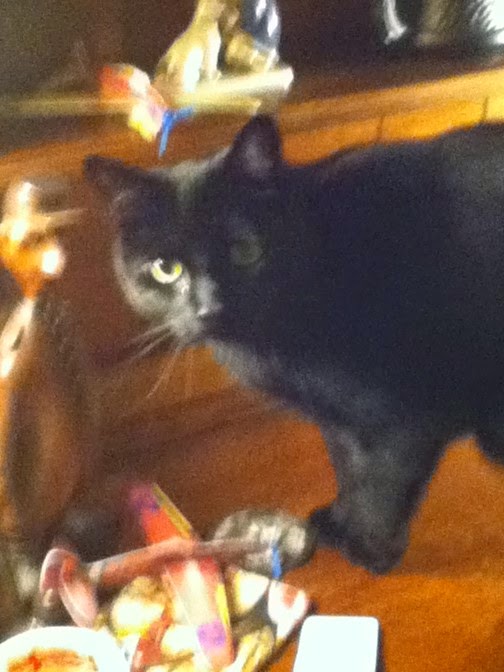 Heathcliff wants me to write, rather than to mess around on social media.
Posted by Michelle Styles at 8:08 am No comments:

Because Taming His Viking Woman comes out on 20 January 2015

Giveaway ends January 20, 2015.
See the giveaway details at Goodreads.
Enter to win
Posted by Michelle Styles at 12:26 pm No comments:

The end of 2014 flew past. Instead of being on the computer, I rediscovered the joys of doing a jigsaw puzzle with my children. Very therapeutic.

It has been a year since my fil decided to take an overdose and thereby ended up living with us. My mil had been taken into a care home a few days earlier. At first I thought it was remorse but knowing my fil better, it was just that his empire had crumbled.

My fil continues his hermit ways. Despite my asking, he showed no interested in attending any parties or events to do with Christmas or New Years. Of course my dh and I were the ones who were look at strangely when people asked why he wasn't there. I am learning to just smile and wave.
This morning, after taking him to the village to his *supplies* -- various sweets and crisps (he is 81 after all), I was treated to a tirade about elderly men and the way they move slowly and waste the shop assistant's time.
It was all my daughter and I could do to keep straight faces.

He at least now has tins to keep his supplies in. This was after my youngest dispatched a mouse who was discovered sheltering behind the bookcase in the hall. He wants the supplies in his room in case he feels hungry. He now realizes that mice get hungry as well.

Over Christmas I read Bede which has helped with the latest project. Context is everything.
And I have been exercising. It keeps me sane.

Posted by Michelle Styles at 12:18 pm No comments: