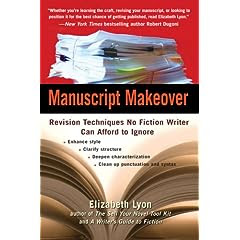 It has been awhile, a long while since I have done a craft post. Recently I discovered the book, Manuscript Makeover Revision Techniques No Fiction Writer Can Afford to ignore by Elizabeth Lyon and I suspect that the book will eventually be on many fiction writers shelves, right next to Self Editing for Fiction Writers by Brown and King.
This book is not about crafting a novel but rewriting and revising. It does what it says on the tin.
It is not flashy but full of good ideas and has helped give me ideas of how to improve the current wip.
It is a matter of application of various techniques. It is also a general revision book, rather than one specifically geared to romance or commercial fiction

Divided in several sections-- Lyon first looks at the novel outside in with techniques about revising for style. Most published authors do not need this section and it is amply covered in Self Editing but it is interesting to see her take. Then she goes into the structural problems, mainly using a 5 act structure and finally she looks at character and how character drives the story.
Each chapter is has boxes of easy to digest info and the chapter summaries with check lists.
For example, the chapter on movement and suspense also includes a section on why a hero might be considered passive and what to do about it. And there is a chapter on character dimension and theme which from my POV is worth the price of the book. It set light bulbs off and it reminded me of what to look for in my characters. In other words, it helped me solve problems by reminding me to ask question of my characters and reminding me of the pitfall. For example, yes I have a back story wound but without the desire to go beyond and actively change, the heroine can seem passive and static. The reader needs to see the struggle.
There is a ton of info here. And it is up the writer to use it. As Lyon points out in her introduction -- different writers work to different method. Dean Koontz in his last typewritten novel figured that he did approximately 31 drafts of the novel (based on the amount of paper used) before he reached the end. He was also told about that novel by his publisher that he was a midlist suspense writer and he should cut the novel in half. he cut five pages. The novel, Whispers went to number 5 and has remained in print for 2 decades. Other authors say to revise a novel no more than 3 times, keep marketing, and writing new stories. Eventually you break in as your writing improves. Each to his own. She recommends taking the book and making it your own.using what you need. As she says, encapsulating the whole conundrum of writing craft books -- there is a world of difference between reading about how to revise and actually applying it.
I intend to apply it to my writing but then I love revising and the whole process of trying to get my words to convey my vision.
It is a book that is most useful if you have the raw material (i.e. a first draft) rather than if you are crafting one. And my poor critque partner is probably going to get me being rather tough on her as the book has given me Ideas!
Posted by Michelle Styles at 8:14 am

Great blog Michelle. Looks like a good book to get. I love "How To" books (ever thought of writing one yourself?). Very pertinent for me at the moment as I am in the revision stage of my current wip. Take care Caroline. p.s have you warned Donna yet - lol.

Caroline -- yes you might find it useful. It can really be used at any stage of writing.

And I have told Donna to be Very Afraid. She is (unfortunately) used to me and craft books and knows that I tend to be tougher after reading them.

Thanks, Michelle. This sounds like a book we all could use. And being a tough cp can only help, I think! I like when my cp is tough. It serves to make my writing better.

I am trembling in my boots.

I actually mean that too!

Poor Donna! :-) Sounds like a great book, Michelle. I'm not much of a 'how to' book person but this could be very useful.

i have this one - its great. is the only book ever on my bedside table and i reread it all the time.

i read fiction books in one go - don't go to bed til they're done - but this is one craft book i can dip in and out of and get good reminders in short bursts :)

Thanks for the recommendation...I'm in the middle of revision :-)
lx