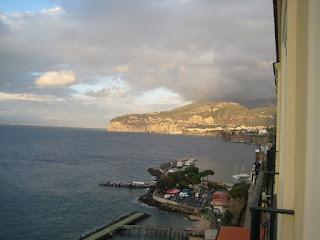 The next few posts are going to be about my magical holiday to Sorrento Italy. I make no apologies. It is somewhere where I have wanted to go for a very long time and I managed to visit some of my all time wish list -- Pompeii and Herculaneum.
We travelled with Citalia (part of the Thomson Group) and stayed at the Imperial Hotel Tramontano. The hotel first open its doors in 1812 and has had such illustrious visitors as Goethe, Byron, Scott, Shelley, Keats, Longfellow, James Fenimore Cooper, Harriet Beecher Stowe and Henrik Ibsen who finished Ghosts. Turrna a Surrento was composed on the hotel's terrace. The poet Tasso was born in the earliest part of the hotel in the 1500's.
We had a sea view French balcony rooms with a perfect view of Vesuvius and the Bay of Naples. The piccolo marina where the ferries goes to Capri and Naples is located to the right. It is also where the cruise ship dock and occasionally very large yachts. The rooms were well appointed.
The restaurant ( I will go on more about food in another post -- you have been warned) is also located overlooking the sea with panoramic views. The waiters are attentive and they have been there for years. On the first evening we were there, the head waiter made a point to personally greet returning guests. In subsequent days, he made apoint of greeting us, and making sure that the children wanted hot chocolate for breakfast and that we wanted coffee. The waiters also exhibited the same amount courteous care. The reception staff were effieicnt and well trained. Nothing appeared to make them flustered, not even several well oiled guests from a very posh wedding.
The public rooms of the hotel are splendid -- inlaid wood, tiled floors and comfortable seating. 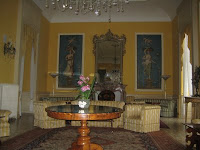 The private beach closes in September but there is a fantastic pool in the garden. The garden is full of rare and exotic plants -- bananas tower over your head and a wide variety of blooms tantalise your nostrils. There is also a terrace bar where you can order light snacks and drinks.
The hotel is often used for wedding receptions as the Cloisters of San Francisco are next door. Apparently they do up to 6 civil wedding per day at the Cloisters. Many wedding photographs show the unforgettable view over the Bay of Naples from Sorrento's public park. This is the same view that we had out our window...
The weather was warm, and for the most part sunny. There was some rain but mostly at night. In any case, we were never bothered by it. It was simply a wonderful wonderful holiday. And I would say -- go, go to the Imperial Hotel Tramontano if you like old fashioned comfort and surroundings to die for.
...I returned to yet more revisions for the third Viking, but these are tweaks.
Posted by Michelle Styles at 10:06 am

Welcome back - missed you - and I can't wait to hear all about Sorrento and Pompeii and Herculaneum. And the food. And the art.

It's one of my top three wishlist places to visit, too (along with Tromso and Luxor).

Oh, it sounds amazing and the pics you send even made the dh goggle. I am so glad you had a great trip, you needed it and now I live in fear of your whip!

Oh, I'm so jealous, I would love to go to Pompeii

Hi Michelle, you have my feet itching to go there for a vacation. I am just anxious to your viking book in december. I got taken by the viking in a sale on last year mills and boon. After the first few pages let me tell you that you can add another loyal reader to your list. I am so glad l discovered your books.

Avi --
Thank you so much for your comment, you do not know how much that has made my day, particularly as I am going through these revisions.

Kate,Donna and Nell -- Hopefully I can do Pompeii and Herculaneum justice. They are wonderful. So evocative.