Yesterday, I finally watched Consuming Passion: 100 years of Mills & Boon. What the BBC did was to look at three women's lives and the way M&B books made an impact. The stories were intertwined. They followed the real life story of Mary Boon (which I thought became the most interesting), the fictional account of an unmarried woman in 1974 whose disappointment in love leads her to become a M&B author and in 2008 a university lecturer who is teaching M&B books in a course on the romantics. All three women end up becoming empowered by their experience and their lives take a different direction. 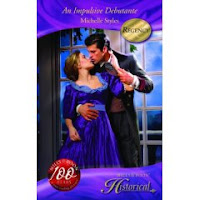 However, I let out many excited squeals of delight when the opening credits rolled. The producer/art director had cleverly used real book covers with the actor's names in place of the authors. Suddenly I saw my book -- An Impulsive Debutante. The actor O T Fagbenle was listed. I had thought perhaps it was because he was a newcomer and therefore it was a slight inside joke, but have looked him up and see that he has been acting professionally since age 14! He has also appeared in Dr Who and something called grown ups. Anyway, he did play his part of the provocative love interest to the university lecturer quite well. (Although I will admit to wondering -- what else did the Emilia Fox character see in him, what was it about him that challenged her) But I was very honoured to have his name on my book cover as it were. And I suspect that he will have a very long career in front of him.
Later in the programme, the Emilia Fox character gives a lecture using M&B covers to illustrate how the heroes have changed. It was lovely to see Anne MacAllister's cover for The Nanny and the Playboy (Anne's latest has just been released in the UK btw) and one of Kate Hardy's.
It is a fun programme and so fingers crossed that it is repeated on BBC 2 and on BBC America.

Realms on Our Bookshelves have reviewed A Question of Impropriety. The reviewer said many lovely things. But one of the things I was proudest of was: I used to enjoy historical romances like these but have been sidetracked by intricate and intense historical, contemporary and paranormal romances. Reading this book I remembered what true Regency is all about and I enjoyed it immensely. With Michelle Styles’ keen eye for historical details like clothing and food and her knowledge of subjects typical to the time-period, like horses and engines, she took me on a journey back in time to the 19th century.

Regular readers of this blog will know how hard I worked last year on the book, and the revisions. So I am very pleased when I am to connect with readers and reviewers.

My newsletter should go out in the next couple of days. but currently I am trying to get the revisions done for the latest Viking. Right now I am far happier with it. I really want this one to be totally excellent. It should go to my editors on Monday.
Posted by Michelle Styles at 7:07 am

Email ThisBlogThis!Share to TwitterShare to FacebookShare to Pinterest
Labels: An Impulsive Debutante, BBC 4, Mills and Boon, realms on our bookshelves