The first excursion we went on was the guided tour to Monte Cassino and Caserta.
My dh had long wanted to see Monte Cassino, a view reinforced when he read Italy's Sorrows by James Holland about the Italian campaign earlier this year. As I knew we would be doing the Roman bit, I readily agreed once the I knew the excursion was possible. 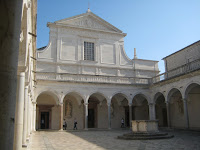 The abbey at Monte Cassino is famous for two things. First of all, it is the resting place of St Benedict and Saint Scholastica. St Benedict who is the patron saint of Europe founded the abbey and formulated his rules here. The abbey has a commanding view over the plains.
In 1944, during the Allied advance, it was mistakenly thought that the Germans were using the abbey as a lookout point. In a badly coordinated attack, the abbey was reduced rubble. This enabled the Germans to hold the mountain much more easily and it was only at the cost of many thousands of Allied troops that the mountain was taken and the way to Rome and the North secured.
After the war, the Germans were put to work restoring the abbey and today, the abbey is completely restored and it is hard to believe that such a beautiful place was ever the scene of such destruction.
From the windows of the abbey, it is possible to see the giant Polish cemetery. The Poles were the first ones up the mountain. 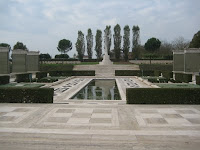 After the abbey, we went to the British Commonwealth cemetery at Cassino. It is the largest in Italy. Those who fell in the area are buried here and there is a memorial to those soldiers from the Italian and Sicilian campaigns whose final resting place is unknown -- 12 upright black slabs with the names engraved. The headstones give details of the soldier and in some cases families have added their own personal thought. Because Donna Alward, my critque partner is Canadian, I made a special point of visiting the Canadian graves. Off to the far right are the graves of the Indian Army. several simply said -- a soldier from the Indian Army lays here. Muslim and Hindu graves have different inscriptions. And over all towers Monte Cassino. 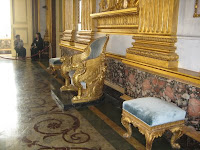 After lunch, we went to the royal palace of Caserta. I will confess to not knowing much about the Kingdom of Naples (or the Kingdom of the Two Sicilies as it came to be called after the Napoleonic era) but it was thoroughly interesting. While people tend to focus on the repressive and corrupt nature of the final years, the 18th century and very early 19th century produced a large outpouring of culture. Charles Bourbon started the palace before leaving to become King of Spain. His son Ferdinand and Ferdinand's wife Maria Carolina (daughter of Maria Theresa, sister to Marie Antoinette) continued the building. The palace was eventually finished in 1832.
It shows baroque at its height as well as the Neo classicism that was so prevalent in the time period. Charles, of course, was the monarch responsible for the initial excavations of Herculaneum and Pompeii. The palace incorporates a good deal of silk, inlaid wood and marble as well as gold overlayed wood. 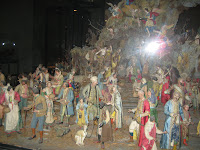 At the end of the tour, there is a 1200 figure crib (nativity set) that originally belonged to Maria Carolina. The nativity set of course is one of the great traditions of Naples and these figures who are mainly dressed in 18th century Neapolitan costume are simply superb.
The gardens are modelled on Versailles and are one of the last remaining 18th century large scale gardens in Southern Italy.
Today the palace is used by the EU and only the Royal Apartments are open.
Posted by Michelle Styles at 6:14 am

Wow, the DETAIL in that nativity set. Amazing. And 1200 pieces?

That chair is gorgeous, too.

I am not sure how well I could handle the cemetary...I have tears just reading your account of it.

I watched a travel show recently that toured Auschwitz and I had a very difficult time, even with the "distance" tv provided.

I'd love to see Passchendaele, but I'm terrified I'd be a blubbering mess in the theatre. I will probably watch it at home with tissues on hand.

Such rich history. That Nativity set is huge. They were very organized back then.

The chair is the throne btw. But it is totally goregous.

I wore sunglasses while I was at the cemetary -- thinking ahead but I did have tears streaming down my face. Look on my grave with pride, and try to live your life as nobly as I died did it for me.

The Nativity set is unbelievable. That picture is only a small part of it. The pieces are about 18 inches high.