Excursions from Sorrento:Vesuvius and Pompeii

Rather than taking a guided tour, or going on the train and hiring a taxi to get to Vesuvius, we hired a private car for the day. Given the number of people in the family, it made sense, particularly as I do know a little bit about Pompeii. It does not make sense to drive in Southern Italy -- opportunities for fender benders abound. The roads are narrow and the driving appears to be controlled anarchy.
We chose to go to Vesuvius first. Most of the tour companies, I believe do Pompeii in the morning. The other problem with the tour companies is that they do not always give you enough time to do Pompeii...
In any case, given the narrow windingness of the road up to Vesuvius, I was pleased the road was quiet. The road built after the 1944 eruption snakes through lava fields where waves of lava rest, bend and twisted. Foments forever frozen. Here and there bits of green have colonised.
The road stops, and you are forced to continue the journey on foot. A few metres in, a man shouts -- no charge, no charge as he hands out walking sticks. He does expect a tip on the way back down.
The steep climb snakes up and up until you reach a kiosk selling carved lava, wine from Vesuvius, drinks and guidebooks. Beyond lies the crater. Various guides mill about, but you are not forced to join a tour. You can simply walk to see the crater. And what a crater it is. 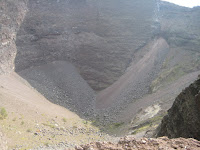 The power that created the huge hole is staggering, but there is comfort in thinking that the volcano has been quiet....However rounding the next bend, steam pours from the ground and a distinct sulphur smell hangs in the air. Vesuvius is most definitely only resting.
Vesuvius is well monitored for any increase in activity. Given that the most densely populated part of Europe lies well within its path, this is good. BUT if anything should happen, the evacuation is going to be chaos. It should be noted that although Sorrento is built on tufa (volcanic mud), it is far enough away from Vesuvius.
After coming down, we were driven to Pompeii. I had just admonished my youngest to put on his seat belt when we were involved in a very minor crash outside the entrance to Pompeii. The car in front of us suddenly stopped and our driver hit the rear bumper. It was quickly sorted. 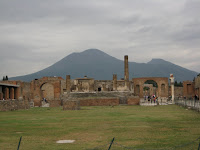 We did not stop for lunch but went straight in, ignoring all offers for guides.
I have been to many Roman sites before but nothing like Pompeii. The forum was built so that Mount Vesuvius dominates the axis. Just off from the forum, a large shed hold amphora as well as several plaster casts of people who perished. The vast majority of things are now in museums. 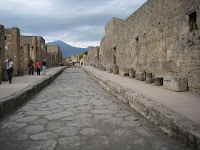 This is just as well as it is quite obvious that they still have problems with theft.
The streets are all laid out, and it feels a bit like walking in a silent town.
The new excavations are done to show how the town might have looked and have preserved the graffiti and the various shop front frescoes. Several of the roofs have been reconstructed. 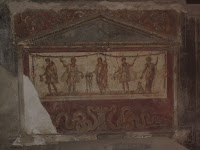 There is a lot of EU restoration work going on and so some of the houses like the House of the Vettii which I had wanted to see were closed. But there is more than enough to see in any case.
The main problem with Pompeii is that you can not see everything on one visit. You can get a taste, but not much more. It is a large town, far larger than say the Williamsburg historic district.
We simply looked around Pompeii proper, rather than tramping out to the Villa of Mysteries, for example. After three hours in the heat, the children was starting to flag. There is only so much you can take in.
However, it more than lived up to my expectations and it is somewhere I have wanted to go since I was about 7. Totally enthralling.
Posted by Michelle Styles at 6:01 am

Thank you so much for sharing this. It's a place I would love to visit.

Pompeii was the highlight of my trip to Italy, years ago. It was simply mind-blowing. I could hardly believe how well the art was preserved on the walls!

Pompeii and Tromso (in February) are the two places I most want to visit. So it's still really hot in October? (Files this away for future reference.) Thanks SO much for sharing.