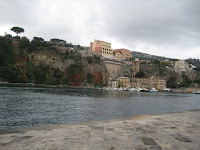 To get to Capri from Sorrento -- you take a ferry from the Piccolo Marina. The Piccolo Marina is the larger of the two marinas and it is where the cruise ships, yachts and ferries go in and out of. But because the Grande Marina was there first, it gets the grander title.

The state run ferry is slower but much cheaper. When we took this ferry, it was supposed to arrive at 9:25 but eventually came in at 10:30. The sea was very rough indeed. We took the smoother, faster more frequent ferry back from Capri. 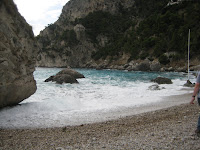 Capri reeks of glamour with numerous boutiques and restaurants for the well heeled. It has long been a favourite holiday destination for the rich, famous and eccentric. The mad Roman emperor Tiberius had his villa here and there is a rock where he apparently dispatched people who displeased him. For Noel Coward -- in a bar on the piccolo marina, life called to Mrs Wentworth Brewster. Even the taxis are glam -- convertible limos. The sea is the most wonderful torquiose blue and air is softly scented with citrus and flowers. 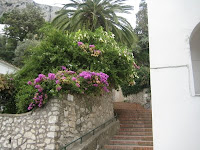 From the ferry, one can either walk, or take the funicular up to the main square. There are 995 stairs on the pathway to Anacapri. Although the central piazza can be come crowded, it is relatively short work to get away from the crowds and head down one of the winding lanes towards the piccolo marina. Along the way, one passes the house where Gorky lived in 1910 -1913. Lenin and Stalin (amongst others) visited him here. And it seems incredible that they dreamt of revolution in such an idyllic place.

The Piccolo Marina was basically empty and looking back up, I was struck how much like Portmerion (where the cult tv series -- The Prisoner -- was filmed) Capri is. The lanes are far too narrow and the people for the most part seem to go around in carts. There are lots of lovely tiled signs, many hand written by artists. Some point the way to a variety of walks, others simply give the name of a hotel or house further up the lane. But they are always in yellow, blue and green, showing the Spanish influence. 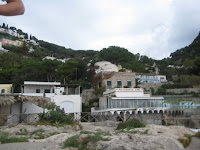 We took the bus back up to the main town. The route went along the Via Augusto which the industrialist Krupp built. When our bus met another bus, it was very a tight squeeze indeed and it was immediately obvious why most people leave their cars on the mainland.
Posted by Michelle Styles at 8:04 am

Email ThisBlogThis!Share to TwitterShare to FacebookShare to Pinterest
Labels: capri

Ok...another for my life list, except I would add the Blue Grotto on Capri...

I'm getting all sorts of lightbulbs...