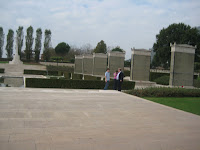 Today is Remembrance Sunday. It is 90 years since WWI ended on the 11 th hour of the 11th day of the 11th month.

It is good to stop and consider those who paid the ultimate sacrifice so that we might live in freedom. 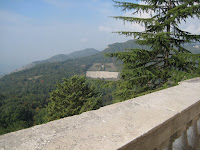 I know when I went to Monte Cassino and saw the huge Polish graveyard and then the British Commonwealth cemetery, the magnitude of the sacrifice was brought home to me. You can just make out the cross shape of the Polish cemetery from this picture.
Many of the graves had simple words -- like died without a stain on his character, or we will remember him. At one grave, someone had placed a picture of the man and the fading photograph of a brave young man in WW2 stared back at me.
Death in war is equal opportunity. Some of those who fell and were buried there were majors, and lt colonels, others were privates, several were simply listed as drivers.

When my eldest went to the WWI battlefields last year, part of the school project was to look up those who fell from our village. Again, they came from all walks of life, but most were farm hands. One had gone out to South Africa but returned when his country was in peril.

There are only at most 31 villages in England who do not have war memorials from WWI. These are the villages where all the men and women came home and they are called the Thankful Villages. 24 have been positively identified. None are in Northumberland. The sheer scale is impossible to comprehend sometimes. But when you realise the norm was for villages and towns to have lost someone, then it starts to become clear. Equally I think finding out about one or two who died helps. It means that they cease to be just a name or just a memorial. And visiting one of the cemeteries also helps bring home the sacrifice these men and women made.

There are many brave men and women who are fighting now and I salute them and hope they all come home.
Posted by Michelle Styles at 7:54 am

We had our school assembly today and I still find it the most emotional one of the year. I forgot tissues...made it through the national anthem ok, but blinked like mad at the last post. Was ok at God Save the Queen, but when the choir starting singing We'll Meet Again, it was a struggle.

Tomorrow both kids are in ceremonies at the cenotaph, and everything here is closed.