Philistine with a capital F

When I first came to the UK as a Junior Year Abroad student, the professor in charge of the group used to say that we were philistines with a capital F. In other words, we were so ignorant about culture that we could not even spell the word philistine correctly. 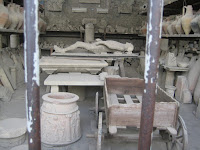 The phrase came back to me when I read Barbara Ellen's column in the Observer yesterday. She went on about how disappointing Pompeii was and how when she went she wanted to see the plaster casts in situ and all there was was a few crumbling frescoes etc. Really dull and why would anyone want to go.
Her remarks were up there with the 18th century traveller who complained that there were no dancing girls or gaming and thus little to hold his interest! 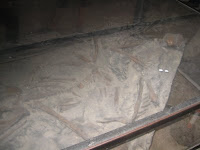 She obviously did not go to Herculaneum as there are bones in situ -- and they are almost unbearable to see. Three people -- a man and a woman aged about 20 and a boy in his teens -- all found together in an upper room. The woman's head was resting against the man's chest when the volcanic mud over took them. We do not know if they were slaves left behind or the children of the house. They were about the only bodies found in Herculaneum until the discovery of the 250 plus in the boat houses. The boat houses are not open to the public. You can just make out the bones in this picture, but trust me when I say that I was glad to leave the room.

Personally I found it very easy to imagine the people in Pompeii and had no wish to be ghoulish. The plaster casts in the locked up area were enough. There was one where the man had sunk down and put his hands up in front of his face. Another was of a dog. But I was glad to leave them behind and to explore the site.
The major problem with both sites is the looting. Even today when people should know better, it is possible to see places where unknown individuals have tried to lift mosaics. I understand that a large museum is planned for both sites, but this is Southern Italy and these things take time. But all you have to do is look with half closed eyes at the great and terrible beauty, then back up at the Destroyer glowering behind.

Neither Pompeii or Herculaneum are dull, but they do take a modicum of imagination. I note that Ms Ellen is also not overly fond of Mills & Boon books either.
Posted by Michelle Styles at 6:37 am