Istanbul 4: cisterns, cruise and claustrophia plus a good meal 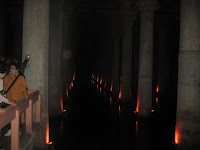 When I first started looking at Istanbul, I could not figure why anyone would want to visit a cistern, even if it was Roman. Basically they are not very exciting -- places to store water. Umm I was wrong. 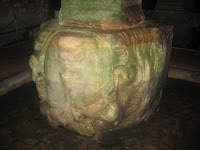 We went to Basilica Cistern on the Monday morning and it was utterly magical. Unlike the other cisterns I have seen, the Basilica cistern still has water and is lit in low light. It feels like you have accidentally strayed onto a set for some fantasy movie. In the water, the carp swim about making ghostly shapes while every so often water drips on your head. In one section of the cistern, two gorgon or Medusa statues lurk. One is tilted and the other upside down. No one knows why they are there or why they were placed in such a fashion. The logical reason is that the Romans reused bits from other places in the Empire but it is more fun to speculate on a paranormal reason, particularly as the iron stain on the statue showed up only when I took the picture! 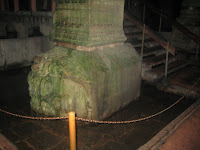 The cistern was built in 532 by Justinian and was used to store water for the Great Palace. It was forgotten about some point before the Conquest in 1453 (Turks say Conquest whereas the West often says Fall of Constantinople). Then in 1545, scholar Petrius Geyllius was told by locals how people were lowering buckets to get waters and even catching fish from their basement and the cistern was rediscovered! However, it was not treated with respect and became the dumping ground for all sorts of things including dead bodies. The cistern was restored somewhat in the 18th century and then in the 1950s (it features in the James Bond film -- To Russia With Love) Eventually, it was opened to the public in 1987. 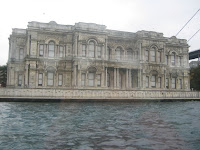 After emerging blinking into the sunshine, we went for a tour of the Bosphorus. Now you can either take the ferry and spend 7 1/2 hours doing the whole thing or you take a more expensive private boat. We opted for a private 2 1/2 tour and sat down in the van to wait, having been promised that the boat was about a minute away. The driver of the van could get a job on Harry Potter's night bus! One minute speeding through traffic and then slamming the breaks on. Luckily the cruise was far more peaceful as we saw various palaces and wooden yalis from the late Ottoman period. The boat stopped just beyond the Bosphorous bridge and we had lunch in Asia.
After the cruise we walked up to the Grand Bazaar. Unlike Sunday when only tourists were about, the Bazaar area was completely crowded. Great masses of humanity pressed down as shop after shop displayed items until they ceased to have any meaning. It felt a bit like shopping on the day after Thanksgiving and this was just an ordinary day. The Grand Bazaar is no place to window shop. It is place to go if you have a specific item in mind. All I wanted to do was escape!

Later, we went out to dinner at the Terrace restaurant in the Hotel Armada near the walls of the Topkapi Palace behind the Blue Mosque. As we walked there, a cavalcade of cars passed us -- sirens blaring from the two lead police cars and blacken windows in the limos etc with an ambulance bringing up the rear. They had just emerged from the Topkapi as far as I could figure.

With its conference rooms etc the hotel felt far more like somewhere that a spy would stay and I was pleased we were staying at the Sultanhan. However, the terrace restaurant was fabulous with its excellently prepared Turkish tasting menu, discrete waiters and wonderful views of the Blue Mosque on one side and the Bosphorus bridge on the other. Just the right place for a memorable final meal in Istanbul.

I drew the two winners from my October Reader's Contest -- Minna who won Carla Capshaw's debut The Gladiator and Roberta who won a book from my backlist. Both winners have been contacted.
My next newsletter goes on the 15th when I will run my annual writing mentor contest, and have a signed copy of The Viking's Captive Princess up for grabs. So please sign up for the newsletter if you haven't already.


Posted by Michelle Styles at 7:10 am

Wow the Basilica Cistern looked and sounded fascinating. Glad you had a good few days there. Take care. Caroline x

I'm glad you seem to have had such a fabulous trip to Istambul. The cistern sounds particularly fascinating, and I'm sure it will appear in one of your books!