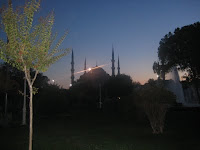 I arrived back from Istanbul yesterday, but have discovered via the kind lady who gave me a Turkish bath that I have RSI in my left wrist. I am trying to rest it etc so my time on the computer is limited and my writing comes first.

Istanbul is fabulous and far warmer than I thought it would be at the end of October.
We arrived Friday afternoon and our hotel -- Sultanhan Hotel was just what we wanted. It is set in a very quiet side street just off the main tourist tourist street of Divan Yolu Cad. This meant all the big tourist sites in Sultanhanmet -- Agia Sophia, the Blue Mosque, The Basilica Cistern, the Grand Bazaar and The Topkapi Palace etc were in easy walking distance. The people running the hotel were very kind and offered a welcoming fruit juice. The breakfasts were good and the view from the terrace restaurant excellent. The rooms were comfortable but without a view. This did not bother us as we slept in the rooms rather than trying to sight see from the rooms.

The first night we walked down the Blue Mosque as the sun was setting and the evening call to prayer began. Never having been in a Muslim city before, it was interesting to hear, but it is loud and I can see how it can be intrusive. Turkey is a secular state and there is this tension between the secularists and the Islamists. One place it is played out is in the head gear. Head scarves are banned in parliament etc. The fez also was banned by Ataturk. However, you did see women wearing head scarves and long coats, even the occasional burka.

Not being sure of prayer times etc, we did not visit any mosques but their minarets give a graceful appearance to the city scape.

For supper we went to Mosiak which is housed in a wooden Ottoman house with tables outside on Incirli Cavus Sokak off Divan Yolu near the Pudding Shop. They serve Modern Turkish food. So we had meze -- a series of cold salads, borek -- fried cheese pastry and aubergine to start. I then had a lamb and aubergine kebab while my husband had the black plum and lamb stew, my son -- manti a sort of Turkish ravioli in a spicy yogurt and I forget what my daughter had. There was only room for Turkish coffee at the end as we were full. The food was excellent and the waiters very helpful.

Saturday was a busy one -- Agia Sophia Museum which looks like not much from the outside but takes your breath away from the inside. They are busy restoring parts so the scaffolding is up. It is also deconscecrated and has served as both a church and a mosque. The Byzantine mosaics are fantastic and must have been hugely impressive as I know what St Marks in Venice is like. Dandalo (the doge of Venice who led the Fourth crusade which sacked Constantinople) is buried here. 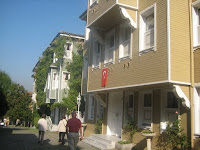 We walked along the Sogukcesme Solak which has a pretty collection of Ottoman houses hugging the palace wall to the Topkapi Palace. But my wrist is giving out and so I will do that in the next installment as it is truly one of The Places in the World to visit, particularly the Harem.

Posted by Michelle Styles at 5:58 am

Email ThisBlogThis!Share to TwitterShare to FacebookShare to Pinterest
Labels: Istanbul

Oooh, Michelle! Just oooh.
And welcome back, of course!

Welcome back. Glad you had a great time, and hugs on the RSI. Thanks for sharing those wonderful pics.

Yuck about the RSI. I have that too. Currently investigating dictation programs.
Istanbul sounds fantastic. Funny about the Agia Sophia. They had scaffolding up when I visited too and that was over ten years ago!