After supper on Saturday, we went to the Galeri Kayseri Bookstore. The shop has the widest selection of English books on Turkey, Byzantium, Ottomans -- basically anything to do with Turkey. I was delighted to discover a handsomely illustrated book on the Harem. My husband found Barbara Nadel who is Istanbul's crime writer much in the same vein as Donna Leon writes about Venice. One of the assistants convinced me to buy Irfan Orga's Protrait of a Turkish Family which details the suffering one family had during World War One. The book was a bestseller in 1950 and remains highly readable. As I was paying for the books, I happened to explain about being an author and being here to do research. At this point, the owner came out, offered me (and the rest of the family) coffee and a chance to look at his big coffee table books in case they helped. The books were works of art and totally lovely. If I had been doing Byzantium, I would have tempted but as it was the Harem book was what I was looking for.
He also had me sign the guest book. It was slightly daunting to see who else had signed -- a variety of best selling authors, diplomats and celebrities but I duly signed, proudly putting Harlequin Mills & Boon Historical Author under my name. 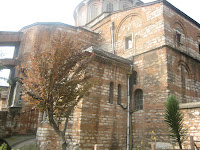 One thing the bookstore made us determined to do was to visit Chora or the Kariye Museum. Although small, it has some of the best Byzantine mosaics and frescoes in Istanbul. Having served as a mosque for four centuries, it is now deconscecrated and feels empty -- despite the hordes of tourists. Like most Byzantine churches it does not look like much from the outside. But the mosaics in the inner and outer narthex are breath taking. Unfortunately some people ignored the signs and took flash photos thereby putting the mosaics in danger.
As the spice bazaar was open (much to our and the cab's driver's surprise), we stopped the cab. First we walked across the Galata Bridge and then we explored the spice bazaar. The Spice Bazaar sells all manner of spices, dried fruit and love potions as well as lokum. There is an intense smell of pepper, cloves and cumin about the place which dates from the 1660's. 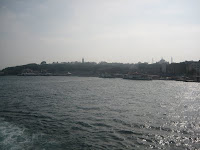 Afterwards being hungry, we went to the Hamdi restaurant which has an excellent reputation for its kebabs and its location. You are supposed to book 2 weeks in advance for a table on the terrace but we were early enough and had no problem securing one. Thus we were able to watch out over the Golden Horn and across to Galata as we ate. They came around with the cold starters and it was very much point at what looks good. The kebabs were excellent and afterwards we had a selection of baklava. 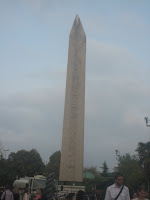 In the early evening we went to the hippodrome where there are three obelisks. I will admit to wondering why there was an early 20th century piece in the hippodrome but then I read my guidebook. The Obelisk of Theodosius was carved around 1450 BC and placed in Heliopolis. Theodosius had it brought to Constantinople in 390 and it has worn rather better than the plinth. There are 2 other obelisks in the Hippodrome. The spiral column which was once much taller and had 3 serpents' heads but these were lost in the early 18th century and the rough stone column which lost its bronze plating to the Forth Crusade.
Tomorrow I will finish up the trip.
Today I am blogging at the Pink Heart Society on the ITV production of Wuthering Heights.
Posted by Michelle Styles at 6:26 am

Hi Michelle
Chora is extraordinary, isn't it - the colours of the mosaics and the designs - beautiful! The mosaics are a bit late for my period, but they do show what could be done. I came back armed with pictures from the shop there.
We also came back with plenty of Turkish Delight as gifts, but someone in the house got at them before I could give it away! I have my suspicions as to the culprit was...