My voice remains a distant memory. My throat aches. The doctor informs me that Laryngitis is in 98% case viral and so it is a matter of time rather than antibiotics. I have started gargling salt water, drinking honey and lemon, spraying my throat with chlorosceptic when the coughing gets too bad, sucking on boiled sweets. If it goes gets worse, I can go back... 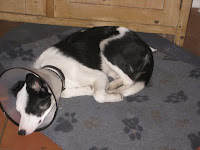 Tess was spayed yesterday. She is six months old and I most definitely did not want puppies. Plus spaying early (before the first season) is supposed to provide some measure against breast cancer in female dogs. It will mean she does not have to go through PMT and nor will there be a mess to clean up. Neither will I have to beat farm dogs off with a stick when we are out on walks. Equally, I did not want an incestous relationship as the chance for inherited defects rockets.
With Hardy, he will be done about a year old. Males are slightly later developers and there is no medical benefit to be being done early. Thus I want to wait until he is mature and his personality has had a chance to develop. But it is important that he gets done as well. I have no wish to breed and lots of other bahavioral problems can get solved...
My main problem now is keeing an active collie quiet. She needs to be on the lead. Tess is also wearing a cone as she has a tendency to try and lick her wound. Apparently smearing it in vaseline will discourage other dogs from licking as littermates in particular will groom eachother.
I am also blogging at Totebags today about the hard work required to become talented.
And finally a picture of all three of the dogs together last Sunday in the sun room. Just because. 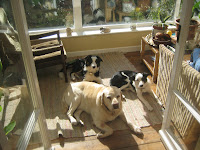 Posted by Michelle Styles at 8:46 am

Hugs on the lurgy, Michelle. And I *love* that last picture. Gorgeous. Thanks for sharing.

(((hugs))) on the lingering lurgy. You and Kate Hardy seem to have a real dose of it right now! Ahhh Tess looks as if she's feeling sorry for herself. My dog Bob was the same when we took him to the vets for you know what - I swear he ignored me and the DH for 2 full days afterwards. He kept looking for his *you know whats* and then looking up at us, and if he could speak he would have said something like "What have you DONE to me?" Take care. Caroline x