Collies have a sense of humour 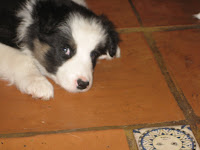 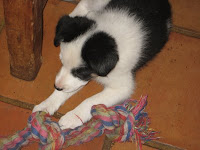 Yesterday, I was treated to collie humour. For example, Tess & Hardy knew I was deliberately ignoring them. They also knew that going on Chile's bed is an automatic no. So having failed to get a reaction, they raced over to the bed and lay down. When I called them, Hardy lent over and gave Tess's neck a lick as if to say -- see, I knew we could do it.

Then last night, as Chile was with us (when you are old and a Labrador sometimes puppy pester power is a bit much) I had closed the door to the back entrance hall and Chile's bed. I went to put Chile away and suddenly there was a scurry of feet and two headlong dives as the puppies rushed to lie at my feet, instead of on Chile's bed. They both wore very innocent butter would not melt expressions as if to say they had no idea why that door was open.
Sometimes, you just have to appreciate it.
And Chile is really more than capable of growling and keeping the puppies in line when he wants to.
Posted by Michelle Styles at 7:39 am

They do look so innocent! Are they still waking you at 5 am?

But they were ever so pleased to see me and behaved very well -- not going into excited overdrive but waiting to be called.

They are lovely natured things. Of course Tess decided to bite Hardy's ear yesterday. He yelped and rushed over to me, had some affection, waited until Tess's back was turned and bit her on the bottom!

They're absolutely adorable - well worth the early starts :-)

I really shouldn't complain because my dog's only fault at the moment is wanting to eat the grass that is left on the lawn from the mower. I don't get it. It's disgusting. But the moment my back is turned, she has a chunk in her mouth trying to be sly about it.... she didn't do this last year.

And your puppies ARE adorable.

They are soooooo cute - you can forgive them almost anything can't you. I've never had puppies - so I can't imagine what it must be like dog training - all my fur babies have come from rescue homes. I've currently got Molly and Bob - who were doggie trained when I got them - apart from a few traits-Molly always takes shoes and sleeps on them when we go out. She doesn't chew them thank goodness! Take care. Caroline x