A blast from the past: A Noble Captive reviewed

It is often very surreal for me that I have had books in print since 2005 or basically 14 years.
One of the great things about writing Historical Romance is that sometimes the books last a little longer and don't become as dated.
Basically how I approached a story in 2005 is not necessarily how I would approach a story these days. The themes which interest me are different.
So when Lynn Spencer tagged me that she had read A Noble Captive and reviewed it for her TBR challenge, random dip for the All About Romance site. I read the review with some trepidation. ANC was my 2nd book for HH and it was a Roman set one.
It came out in January 2007 in the UK but wasn't released in the US until 2010.
I remember lots about writing it and getting my revisions. I had just had my first cataract removed 20 Dec 2005.  It was bought 14 Feb 2006 and I had my 2nd contract -- I wasn't a one book wonder!
I was pleased Lynn  got some of the subtleties. She did miss the fact that it takes place on a island a few miles north of Crete and not on Crete itself.  It was a far smaller made-up island. A minor quibble.
I was pleased that it still worked for her.
She said If you love historical fiction but sometimes find yourself wary to take a chance on a book that might not have an HEA, this novel may be right up your alley.  The romance is very much central to the novel’s plot, but the backstory is so well-developed and rich with detail that I think it will appeal to readers of historical fiction as much as readers of romance.

I should point out that ANC does have a HEA. It is a Harlequin Historical after all.
And it is lovely to see a review after all this time.
Posted by Michelle Styles at 2:52 pm 1 comment:

Email ThisBlogThis!Share to TwitterShare to FacebookShare to Pinterest
Labels: A Noble Captive, All About Romance, reviews

A Deal with Her Rebel Viking cover reveal 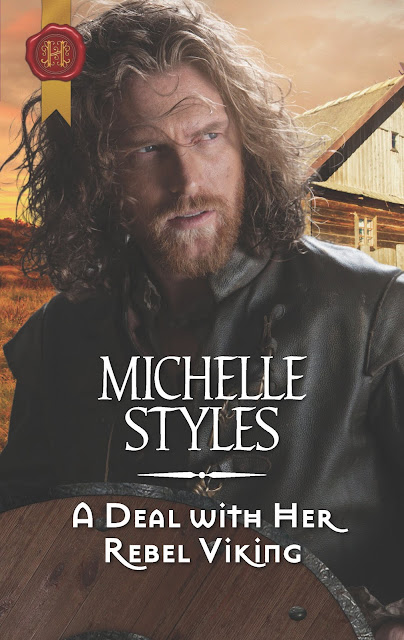 Her terms: free her family
His terms: seduction?
Defending her home, Lady Ansithe captures outlaw Viking Moir Mimirson. The prisoner will be the ideal ransom for her father, held hostage by the Danes. Yet Moir’s flirtatious negotiations exhilarate practical Ansithe as much as they surprise her… Can she be sure that this hardened warrior will work with her, and not betray her? And what of his stolen kisses…can she trust those?

NB The cover model's name is Carson and he is repped by Sutherland Modelling agency so I can  tell you that he is 6' 2", blonde and blued eyed with a 31" inch waist.
Posted by Michelle Styles at 8:01 am No comments: