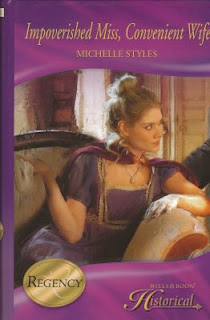 My author copies for IMCW have arrived! It is always interesting to see the cover for the first time. It is the sequel to A Question of Impropriety btw.
The blurb reads:
His unexpected bride…
Wealthy landowner Simon Clare shuns Northumbrian society. With his son gravely ill, the last thing Simon needs is an interfering woman assuming command of his household and nursing young Robert – no matter how sensuous her figure, or how tempting her luscious lips.

Phoebe Benedict knows what it is to struggle, and finds herself drawn to the badly scarred recluse. Despite his tough exterior, she knows that Simon is a father who yearns for his son to recover – and a man who misses the tender embrace of a woman…
And the teaser at the front reads:
‘Will you be silent?’ His hands gripped her shoulders. The heat of him burnt through her clothes. ‘Or do I have to stop your mouth?’
‘Someone has to say these things.’ She stared at him. His mouth was inches from hers. His mouth swooped down and claimed her, branded her, and she knew her words were a lie. She did want something else. Phoebe stilled as warmth pulsated through her. Searing her with its fierceness. His lips called to something deep within her, turned the warmth into a raging inferno. Her hand sank into his hair and held him there.
The kiss lengthened, deepened. Her lips parted and he feasted, devoured her like a starving man. This was no gentle persuasion or chaste kiss but the sort of kiss a pirate captain might bestow. Plundering and taking. And she wanted more. His arms went around and held her body against his, her breasts crushed against his chest. Her melting softness meeting his body. His lips trailed down her throat as he entangled his fingers in her glorious hair. Held her there.
The mantel clock chimed the hour, bringing them back to reality. He stepped away from her, a stunned look on his face.
‘Miss Benedict...I...’
Phoebe looked at him, turned on her heel and fled.
It is my tenth novel for M&B. Hopefully it will do well...
Posted by Michelle Styles at 9:39 am