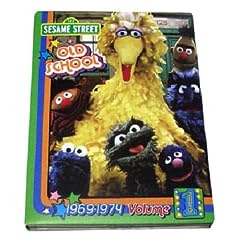 On 10 November 1969, I famously pulled a sickie from kindergarten. My best friend at the time, Tracey, also decided this was a good idea. She then convinced her mother that maybe I was ill and so she came over to visit. I cannot remember where our mothers went but we settled down and watched the pilot of a new show aimed at children -- Sesame Street. We had decided not to take any chances...in case it was not on at kindergarten. We were a bit like that. I think Tracey is now involved in school adminstration as a principal...which is slightly ironic.
A number of years later, one of us coughed to the incident.

I am reminded of this as my eldest gave me the dvd of Sesame Street Old School for Christmas and I rewatched that first episode. It brought back memories of sitting on the couch and waiting to see what happened next and who showed up. For some reason, I remember missing Big Bird. As I had only seen it in black and white, it surprised me that Oscar was orange.

Many years later, my children all watched Sesame Street when they were little. My eldest really enjoyed it. It is wonderful to think that it is still going strong...although I doubt anyone pulls a sickie from kindergarten to watch it anymore.

Posted by Michelle Styles at 8:21 am