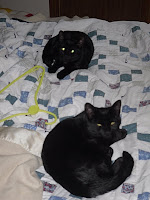 They look cute and innocent but they are fearless fiends. Earlier today, Heathcliff (the one at the back) was discovered hanging by one paw from the top window in the dining room. Inquiring minds want to know how he got there.
I have had to take to hiding my Montblanc pen, the pen I use for revisions. As soon as I put it down, it is a signal for a raid and the pen disappears...
And then there is the campaign desk incident. Thankfully none of the French door's windows broke but the desk needs new hinges after toppling over after being used as a kitten launch pad in a war.
Heathcliff has worked out if he comes and purrs lovingly, demanding utter and total adoration, he will eventually get fed. Note he only does this when he is hungry. Mr Darcy is very much This Cat Sleeps on his Own. He will not settle on anyone's knee but will consent to be being stroked.
Mr Darcy and Tess are great friends. Yesterday, they had a mock battle. Mr Darcy started it by biffing Tess's nose as she slept and then playing with her tail. When she started to get a bit rough, he showed her his claws and she backed away.
Both cats have been done and none of the nonsense appears to have stopped.
My eye seems better and certainly no worse. The painkillers are working. And I have been gardening in sunglasses. There is something therapeutic about pulling nettles and brambles... 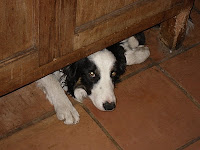 Hardy seems to be settling and stays near me rather than trying to wander down to the neighbour's or beyond. Tess keeps bring sticks for me to throw. When I throw a stick for Hardy, he takes it away and guards it. Hardy still manages Houdini like to squeeze under the kitchen cupboard. It is a particular favourite, particularly when he has rolled in something foul and knows that a bath is in the offing!
Posted by Michelle Styles at 1:57 pm