A bit of research: Consuming Passions 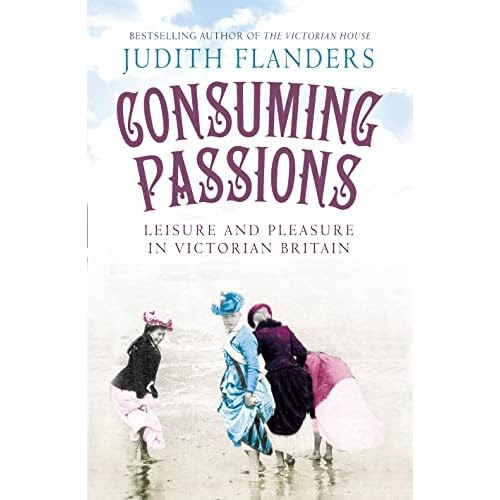 My bedtime reading for the past few weeks has been Judith Flanders new tome on the growth of the consumer -- Consuming Passions Leisure and Pleasure in Victorian Britain.
Victorian Britain is perhaps of misnomer as the book spans both the 18th and 19th century. But I adored the subject, partially because I approach history at times from econ history background rather than a political history background. I find the details about the growth of things like broadsheet music, art, and ready-made clothes endlessly fascinating. It is those things that had the greatest impacts on people's lives and helped their (and indeed our) world.
My main problem with the book is the lack of an adequate index. Flanders covers a lot of information but the index is eccentric in its choice of topics. Or rather it does not act my mind would.
Having said that, it is a book I would unhesitatingly recommend to anyone interested in the period. It has wonderfully detailed information on subjects that are usually skimmed in Regency or Victorian novels.
I shall be using it to give my Victorian novel more of an authentic feel. Flanders includes a whole chapter on the growth of the Victorian Christmas, for example. I also found her chapter on sport and sporting most illuminating.
I now understand the workings of the circulating library, penny-bloods and Salisbury Square fiction as well as how WH Smith started. I found the whole history of shopping fascinating.
I have also finished Flanders' previous effort - -The Victorian House. Although it deals with a later period than my book (1850s and beyond), it serve to remind one of the trials and tribulations as well as touching briefly on the 1840s.. I used to enjoy reading Mrs Beeton at the Lit and Phil -- they had several copies from different eras.
Flanders makes an excellent point about corsets. If you look at the preserved corsets about 6% are under 20 inches and the average is between 20 -26. There is no way of telling if they were preserved because they were exceptionally small either. But much of the correspondence about tight lacing reads like a shoe fetish correspondent's would read today. How many people really do sacrifice their feet for 3 inch high Jimmy Choos?
Anyway, I can thoroughly and heartily recommend both books for anyone interested in researching more about the period.
Posted by Michelle Styles at 1:53 pm

I need to look at this book, Michelle. Thanks for pointing it out. Good luck on the Victorian Christmas!