I finally got to see the UK paperback cover of the Viking's Captive Princess. I love and adore the new look of M&B Historical. However, as my  senior editor warned me, someone in the art department called up the WRONG version of the picture. There is a huge anachronism on the cover. It is even worse on the hardback version. The US version has the correct picture. My senior editor has been hugely apologetic as she is a perfectionist. She did try to have it fixed and  the error is less obvious but the error remains. 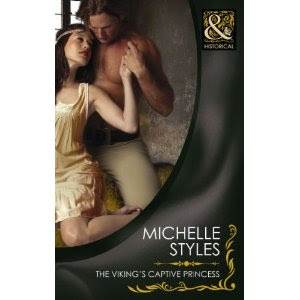 If you can spot the mistake, email me  with VCP contest in the subject line and tell me what the error is to win a signed hardback copy of  The Viking's Captive Princess.  It is first name out of the hat.  Contest closes 31 August 2010. Void where prohibited.
Posted by Michelle Styles at 7:08 am

OK, so maybe not strictly historically accurate (without giving anything away here) but the spirit of the cover is still gorgeous. And as for the story inside... wonderful!

Oh the spirit of the cover is goregous, but it IS a good excuse for a contest.
And I think my senior editor was far more upset than I am.

Not sure if I'm seeing correctly, but is the hero wearing a belt? If he is then that's my answer. Gorgeous, gorgeous cover, though!

Well, yes, a bit of hiccup!

I don't suppose Viking architecture was high an the art departments' agenda, neither that of fashioniable attire for that period. But, if the image was supposed to represent time travellers - both going back in time - they'd pass with flying colours!

Does it really matter? It's the book's interior that counts.

I suppose you could think of the anachronism as a visual metaphor for your book, which offers a modern window into the past?

Laura -- Yes it is definitely A WINDOW from the modern world...LOL

Francine I do love the cover, it was just too good of an opportunity for a contest.
Maya -- think windows and then send your answer to michelle at michellestyles dot co dot uk

LOL, I get it now, *sigh*. I was never any good at contests. But just out of curiosity, did they have buckled belts in Viking times and is your hero wearing one?

I'm not very good at contests either Maya. But it gives people a reason to email me...

Anyway, belt buckles and Vikings. Yes, they have found buckles in Viking settlements. They did wear belts and trousers (although not with flys...my sr editor had to request for the fly to be airbrushed from Michelle William's latest as the artist had a mental abberation...LOL my sr editor is a long suffering perfectionist).

It is a great cover though - mistake or not. Caroline x