To Marry A Matchmaker and creativity

My editor emailed yesterday to say that they have titled Henri & Robert -- TO MARRY A MATCHMAKER.  It brilliantly reflects the story so I'm very pleased with the title.

She also let me know that they want to offer me another four book contract. So I am pleased about that. It will be a small matter of hitting of deadlines!  But I should be able to do that. I am the one who set them and have no one to blame but myself.

I learnt a lot from rewriting TO MARRY A MATCHMAKER. One of the big lessons was never ever to take my process for granted and that  certain things can become rusty. Even if you think you know what you are doing, it doesn't hurt to go make to the beginning and revisit. In my case, it was revisiting Writing A Romance Novel for Dummies by Leslie Wanger and realising where I'd gone wrong. There is a lot of basic info in there. Info I once knew and then forgot. For example, you might know about the sexual tension between the characters but unless it is obviously on the page, the reader can't. Equally, she gave a few ideas on how to identify a sagging middle. One big red light beacon for me was the sudden focus on secondary characters. I had done that and it had to be resolved. Here I'd always considered that I was good at pacing.
Twyla Tharp in her book The Creative Habit gives the image of polish a clock face. It is about how dancers work on skills. It is a good analogy. However, you have to know which clock to polish! 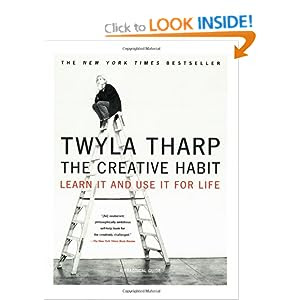 The Creative Habit is another of those books that bears re-reading, particularly if you feel like you are in a creative rut.
For example she quotes the novelist John Gregory Dunne -- Because one has written other books does not mean the next becomes any easier. Each book in fact is a tabula rasa; from book to book I seem to forget how to get characters in and out of rooms -- a far more difficult task than non writers might think.
And further on in the same chapter -- The great ones never take the fundamentals for granted.

So fingers crossed that this next one goes easier and that I remember the focus and the main purpose of the story is the ROMANCE.
And it is a good reason why I'm pleased both books live on my bookshelves and I'm able to go back and re-read them.
Posted by Michelle Styles at 7:25 am

Email ThisBlogThis!Share to TwitterShare to FacebookShare to Pinterest
Labels: The Creative Habit, To Marry A Matchmaker, Writing A Romance Novel for Dummies

Michelle, Many congratulations on the four book contract, You must be thrilled! And I like the new title - I love matchmaker stories. Thanks also for the book tips, I shall look out for them. You made me smile about characters coming in and going out of rooms, I was thinking about that only yesterday ;) . The main thing is Congratulations!

Hi Michelle - great news on the 4 book contract. And great news on the new title. I can't wait to read it ;). I agree that Romance Writing for Dummies is a great book - I'm always dipping in and out of it; along with Manuscript Makeover which you recommeded a while back. Have a good BH weekend. Caroline x

Thank you both. I was very pleased.

And Carol I'm glad you love matchmaker stories...I really believed in this story.

And that quote always makes me smile.

Caroline -- the Leslie Wainger one is excellent. It is all there. I'm glad you like the Manuscript Makeover as it opened up vistas for me.