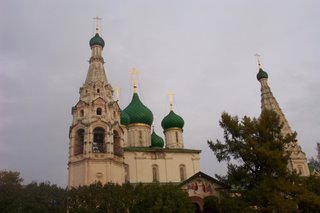 Late last night my eldest arrived home from two weeks intensive language training in Russia. His luggage was lost on the way home and is now awaited...

Thankfully he avoided being involved in any of the commotion in Red Square yesterday, although his bus did park by a group of former communists. My dh saw about the disturbance on tv but decided I shouldn't be worried and so said nothing until the eldest was safely home.

He had a good time, but said that the Russians were obessed with not having any free time, so eveything was programmed and planned. He was surpised by the extremes -- in Russia you are either v wealthy or v poor. There is really no middle class. The picture is one of the many onion domed monasteries he saw. He found the language training intense, but enjoyable. Amazingly he even joined in the folk dancing, but found a way to do the lighting during the final concert. And he does want to go back to Russia at some point. His Russian teacher there was a professor of English at Moscow University.

He returned home taller than when he left, and I was ever so glad to see him. According to him, he was never homesick. It is good to let them go but really great to have them return safe and sound.

In other news I have begun contributing the Tote Bags and blogs blog. It looks to be a fun site and Leena has lots of things planned. as well as a whole host of authors blogging about different things. Please do come and visit.

Last night, I went to the Hexham bonfire and fireworks display. Because waitrose (an upscale UK supermarket) has just opened, they provided the fireworks. It was one of the best, if not the best displays I have ever seen. The bonfire was fairly spectacular as well -- I am not quite sure what the effigy was supposed to be -- a Statue of liberty type lady perched on top of Roman temple. The burning started in the roof, and eventually the blaze burned brightly in the night sky. the entire thing took place on a hill overlooking the Abbey. Afterwards, we went back to some friends for supper.

Posted by Michelle Styles at 10:36 am

Glad your son's home safely. Hope his luggage turns up soon. You're right, it is good to let them go, but (my son's 14 and daughter's 17) I miss them loads and I'm always glad when they come home.

Glad he made it back home. Love the picture! :)