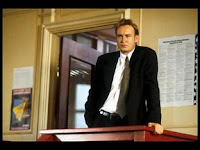 Tonight is the final of the Life on Mars. It has been a wonderful show. There are many reasons why I should not like Gene Hunt, but I do. He has a core integrity, and he is very loyal with a code of honour. Okay, it might not be your code of honour but it is his. He also has some of the best one liners in recent television. Philip Glenister was born to play Gene Hunt.
I also love how the secondary characters like Phyllis, the desk sargant are drawn. You can see them as 3-d.
It is a show that has kept me coming back for more. I am interested in finding out about why Sam Tyler is there and why he went there. Was the accident an accident? I reminded of a time travel book I read once where a woman and her g grandmother switched places. I suspect if I tried to explain it logically it wouldn't work. and there would an ick factor. Suffice it to say that the woman was never able to get back to her own time and crippled by a stroke had to watch helplessly as her younger self tumbled into the mirror. And I can't remember the name of the novel,but it was partly set in the goldfields of California. I used love time travel books. But there is a paradox in time travel that makes them difficult to write.

Was an *older* Sam driving that car? Did he send himself back into time because he knew that was where he would findthe love of his life -- Annie? Was Annie driving the car?

I hope they don't bottle it and that the ending is satisfying. I am looking forward to Ashes to Ashes. gene Hunt is too good a character for the BBC to get rid of him. BTW the show which is the one of the most popular in BBC for a decade nearly was not shown. It is what they call a sleeper. Whatever it is, I shall be watching the final tonight.

Oh and I have started writing my next wip. Early Victorian. I know what my hero looks like, but I don't havea photo of him. Philip Glenister served as a model for my latest one. See above. Can't you imagine him as a Viking?
Posted by Michelle Styles at 5:02 pm

Best TV in ages. And it ends tonight. Sob. (Our box set is pre-ordered for Monday, though.)

I'm dying to see how they solve it. Agree with you - I hope they don't bottle it. I have heard rumours about a series with Gene Hunt, though. (Philip Glenister just steals it. And my fave bit from this series has been the Camberwick Green opener - not sure if you ever got that in the States, but Brits of our generation are a bit sad about it... *g*)

Re time travel novels - I think my fave is Lady of Hay. Few have done it as well as that, imho.

ACK!!! You do realise that I had to go to Amazon and order it!!! I didn't think they'd release it so quickly.
We got the soundtrack of series 1 and I am hopingthey will do a soundtrack for series 2.

There is a Life On Mars myspace that has the camberwick Green sequence. And yes, I got it.My dh insisted that I learn about such things. I became a big fan of the Herbs as well.
My dh also likes Half Man and Half Biscuit=who does a song about Camberwick Green.

Lady of Hay is excellent. I did enjoy that one. I know she has just done a Roman time travel but I didn't bother to read it.

My bloke is in love with this program too but I only started watching it with him recently. I agree with all you've said about the characters. I thought the ending was good -- although I got a bit worried when I thought it was going to finish two minutes before it actually did! Do you know when the spin-off series will be on?