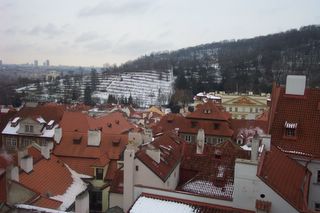 The road to the castle is steep and winding. The guidebooks suggest taking the metro, but we walked, taking in St Nicolas church where Mozart played the organ in 1787. It is an excellent example of High Baroque -- all gilding, statues and frescoes.
The guards outside the castle complex wear dark blue uniforms and white fur hats, apparently designed by the same costume designer who did the costumes for Amadeus. St vitus has impressive stain glass, including a window by Mucha.
At the Old Royal Palace, the Vladislav Hall is huge with a vaulted ceiling, and a polished oak floor. It used to be used for indoor jousting. You leave by the riding stairs, a gently slooping stone staircase where knights rode the horses up to join the joust.
Goolden Lane is full of tiny doll house like shops. Kafka wrote The Caastle here. The name reputably comes from the alchemist toiling away to turn lead into gold during Rudolph ll time, but my blue guidebook says that this is just astory. It is was where the goldsmiths worked under the watchful eyes of the palace guards. It reminded me of Prtmerion in wales -- very staged.
For some reason my dh decided the boys should have a genuine Soviet hat, so we went in search of a miltary antique shop. Stillettos were in the window, Nazi belt buckles on a shelf, to one side hung a dark brown leather coat such as someone in the secret service might wear. A haze of blue smoke hung over the shop and two men were arguing loudly in a mixture of Czech andRussin. We backed away slowly. Back on to the streets where shoppers scurried, Christmas lights twinkled and cars zoomed past.
Posted by Michelle Styles at 6:09 am