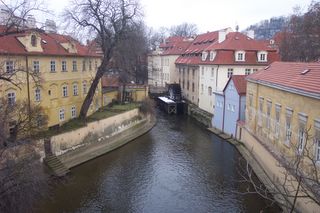 On Thursday we explored the Old Jewish quarter -- a harrowing experience. There was a memorial to all the Jewish people from the area who did not return after WW2. Over 77,000 people were sent off to concentration camps, approx 10,000 survived. Of the 10,000 children, only 242 returned. They had a display of drawings the children had made in the Trezin camp, very moving -- pictures of home, dreams of the future, and the names and what happened to them. I was close to tears. I had not realised exactly how small Jewish ghettos were. It must have teeemed with life once. Now it is full of tourists, looking.
After that we climbed the hill once again this time to the Loreto -- a place of Catholic pilgrimage as it contains a replica of the Santa Casa -- the supposed house where Mary had a visit from the Angel Gabriel. Apparently the orinal is in Italy having been moved one night by angels to escape the infidels. Or so they say. The treasury had some fabulous pieces all covered in pearls, coral and diamonds. The Prague star contains 6,300 diamonds from Princess Ludmila's wedding dress. Thedress ornially had 6,500 diamonds but the craftsman took the others as payment. Stunning to look at.
On the Friday we walked around the National Museum, looking at the Natural History collection. Then we went to the Crypt of SS Cyril and Methodius. In 1942, the Czech parachutists who assignated Heyrich, the architect of the Nazi's final solution, made their last stand there after they were betrayed by a fellow restiance fighter. The bullet holes are still in the walls. The Czech made a valiant stand, holding out for a few days. They tried to dig for the sewers but failed. The inside of the crypt has wreaths of poppies, ribbons with Czech colours and moving tributes to the men's bravery. As a result of the assignation, over 5,00 people died. But the Czech considered it a small price to pay to get rid of the Hangman of Prague.
In the evening we saw a production of Mozart's The Magic Flute at the State Opera. Beautifully sung. Cream with gold. Three tiers of boxes lined the teatre, the boxes were a deep red. A real treat for my eyes and ears and a fantastic finish to the trip.
Posted by Michelle Styles at 6:09 am

I can't for some reason leave a comment on your most recent post. But I have to say how very ALIVE your posts on Prague are. I hadn't really considered it as a place I wanted to visit, but you made it sound so intriguing! Are you sure you don't want to write a travel book?

Glad you had such a good time. Sounds an amazing place and you've put it on my travel wish-list.

Desperately sad about the ghetto area. Those stats are heartbreaking. (Like the bit of Charlotte Gray I couldn't handle. Same reason.)