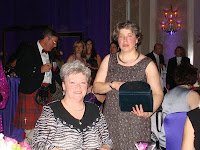 As it was a picture (well several) from last year's Harlequin party in Orlando which finally made me face the fact that I really had to work at it, I thought I'd give last year's picture and this year. Note: no waist last year. (I was also wearing two layers of magic knickers) Rather more waist this year. 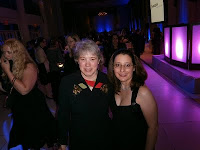 The black dress belonged to my grandmother and was orginally bought for Fasching in 1949.  It is now at the dry cleaners. They were rather worried about the beading but what can I do? I did dance all night in it. 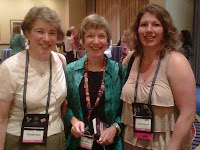 I think the picture from the digital day shows my waist better. Again the top is my grandmother's. When she died, I gained a new vintage wardrobe.... The picture is with Blythe Gifford and my cp Donna Alward who is looking fab.
HOWEVER, I did eat rather too much and didn't any exercise so this week it has been back to Jillian Michaels 6 weeks 6 pack flat abs fast. I have the AMBA lunch at the end of October as my next goal. Professional pride is a great motivator.

Highlights from the RWA Nationals were the parties (what else?)
1. The Book blogger tea. My daughter is still wearing the fascinator that I acquired. It was utterly fantastic to meet so many reviewers including Pearl from Realms on Our Bookshelves and Lyn Spencer from All About Romance. I had a great discussion about late 18th century novels with Anime June. I think that they will repeat this next year and it is worth while going.
2. The Harlequin PJ Party. I went in my PJs much to my son and daughter's disgust. Deb Hale was there and so finally after many years, I was able to meet an author whom I consider a real mentor and who really encouraged me to write historicals when I was just toying with the idea. The eharlequin Library lives long in my memory. 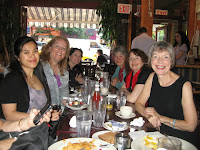 3. The Hussie's breakfast. Every year the Harlequin Historical authors meet for breakfast and a chat. This year we went to the Glaxay Diner which Michelle Willingham found (Michelle W is great at organising) and it was wonderful just to catch up, particularily as Historical is going to simultaneous publication. Also the Historical authors were able to plan some upcoming events as we really do believe in the power of the series.
4. The Historical Tea. We took a stretch limo to the tea which was at the Mt Vernon Hotel Museum (a hidden gem of NYC). It used to be called the Abigail Adams Smith House  but the curators decided that the link was tenous and they wanted to protray it as a day hotel from the 1820s. I was able to stay for the tour which was precisely the sort of thing I love but not the tea as I had doubled booked.
5. The Harlequin Black and White Party. It was truly amazing. Everyone bare one or two was in either black or white. The venue was sublime. They gave out black Harlequin socks so I was able to kick off my shoes and dance. It is the ONE time I get to dance without anyone commenting about how rubbish I am. I stay to near the end...ALl I can say is that if you can go, go.
6. finally the Rita awards ceremony. It was fantastic to see the amazing achievements of the women who won. Sharon Sala's speech had me in tears.  Afterwards we went up to the View, which is a rotating bar and had a drink. The view of NYC at night is unforgettable.
Posted by Michelle Styles at 9:44 am

Michelle, you look terrific. How I wish I had your willpower! I'm aiming to lose for AMBA too, and your success has really spurred me on.
I'm so glad you all had such a good time.

I think it is all about making that deicision that you are going to do it. And recognising that if you want to lose weight/get in shape that you have to work hard at it. It doesn't come for free.
I know how much I have SWEATED.
Aiming for AMBA is a great goal because it is achievable. It is the whole Professional Pride thing.

What a difference a photo makes! You look fabulous! I love your grandmothers beaded dress. Very charltonesque (if that is a word!!) It's a great thing will power, and it's great when you see the results as you demonstrate. I'm on WeightWatchers at the moment. To date I've lost 22 lbs. Hard work, but people (and myself) are beginning to notice...Caroline x

Hi Michelle! It was so great to see you in person at the signing. You looked fabulous.

Everyone, the pictures are great, but she looks even thinner in person! You are excercise and health inspiration, Michelle ;)

You look gorgeous, as always.

When I really noticed the difference in Michelle was when we met up for a Pink Heart Society toast. She was dressed very casual but her shirt showed how LITTLE of her there is!

She's been my biggest support as I also reshape my bottom line. :-)