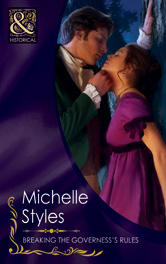 Breaking the Governess's Rules was officially published yesterday. So it means it should be in Tesco, Asda, WH Smith and all the other places that Mills & Boon are sold in the UK. It is also available from Amazon.co.uk and The Book Depository.  It is also on all the ebook formats offered in the UK, including kindle.
At the RNA Northumberland meeting yesterday,  romantic comedy novelist Abigail Bosanko kindly showed me Breakingthe Governess's Rules on her kindle. She had preordered it and as if by magic, it was on her kindle when she woke up on 1 March.  As I don't have one (yet), it was lovely to see. Apparently a new feature will be actual page numbers rather than percent read. But for anyone who struggles with font size, I can see how an e-reader could be a real boon. Abigail adores hers and waxed lyrical.
Luckily she also adored Breaking the Governess's Rules. I always worry. Like Donna Alward, she wants Nella Blandish to have her own story. I was treated to reasons why and who should be looking after Nella when the time came for Nella to have  her season.  This is what happens when you have authors as friends.
Does anyone else feel this way about Nella? Should I write her story?
I should mention that there is Sophie to come in To Marry A Matchmaker...and I am actually fond of a certain secondary in my current wip.
Oh and there is an excerpt up at Unusual Historicals and I will be there on Sunday with two copies of Breaking the Governess's Rules to giveaway. It is leave a comment
Posted by Michelle Styles at 10:13 am

Email ThisBlogThis!Share to TwitterShare to FacebookShare to Pinterest
Labels: breaking the governess's rules