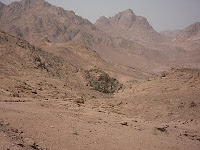 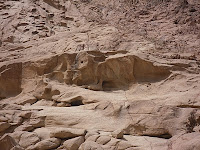 By any measure, St Catherine's Monastery is remote. It is in the middle of the Sinai Peninsula and there is one road which leads to it. It is only open 3 hours per day, three or four times per week. The Greek Orthodox monks are determined that this is not a tourist attraction but a working monastery of enormous significance to all Christians, but particularly to those of the Orthodox faith.

Why is St Catherine's important?
First of all, St Catherine is the wrong name for it. St Catherine of Alexandria died in the fourth century and her name is given to the firework -- the Catherine wheel. She and her relics did not become associated with the place until some enterprising monks *discovered* her uncorrupted body etc in the area around the time of the Crusades.
Second, about this time, a document purporting to be a treaty between the monks and the Prophet was also *discovered*. The Prophet recognised the holiness of the place and allowed the monks to be there. Very enterprising and determined these monks. A copy remains in the monastery library. 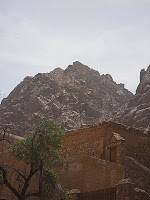 This monastery was built over one of the earliest Christian chapels, founded by St Helena in the 360s. St Helena was the mother of Constantine the Great and started life as a bar maid. She is probably the person most responsible for legitimising Christianity in the Roman world. It bothers me that her contribution is often forgotten. She was either very lucky or she did her research etc. Afterall the Romans did keep records...

She built the chapel, not because of Catherine but because of Moses. The chapel which is the holiest of holys in the monastery is built over the roots of the Burning Bush. The monastery has taking a cutting of the Burning Bush, and interesting it is the only one of its type to grow on the whole of Sinai. It is a sort of acacia. Also contained within the walls is the well of Moses where he met Jethro's daughters. Behind the monastery is Mt Moses where tradition has it that he received the 10 commandments. Thus it is Moses, rather Catherine who is the focus of the monastery. But as he plays an important part in three religions and volatility of the region, you can forgive the monks for safeguarding the monastery in other ways.
Because of its remoteness, Justinian built a fortress around the chapel in the 6th century. Napoleon reinforced the walls. There is a place where they poured burning oil on to the maundering Bedouin and the walls are etched in Coptic crosses. The original Justinian doors are still there, and it also contains icons that predate iconoclasm. St Catherine's boasts one of the best libraries of old documents including codices, second only to the Vatican. 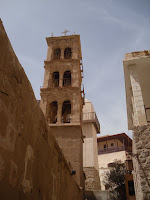 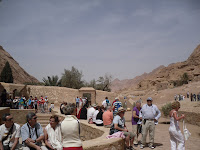 Many people also walk up Mt Moses or Mt Sinai but due to opening hours and the heat, they do it at night, taking the camel trail up, sleep under the stars and then either go back down the same track or the Steps of Repentance -- 3,000 steps carved into the mountain where you do have scrambled with your hands. As we were only in the Sinai for a week, it was far too complicated. so we opted for a fleeting visit. As it was, the day started at 6 am.
Once inside the walls, it is like a medieval village and very crowded. The silence of the desert replaced by the murmur of hundreds of voices. There are loads of Orthodox Christians who come on a pilgrimage, Russian Orthodox in particular. The women were wrapped in headscarves and they were beating their breasts, mumbling their prayers or simply bowing their heads. The guide, a devout Muslim, pointed out that it was very different to other forms of Christianity. 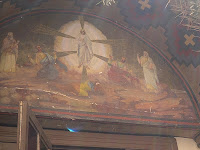 The church of St Catherine's which also houses the icons is very much un reconstructed Byzantine and rather over powering. The Russians were busy being pilgrims and kissing various relics. But it is utterly glorious. Byzantine as it was meant to be. 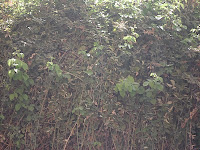 The descendant of the Burning Bush was the one spot of greenery within the walls. The monks did have another dusty garden where they grew olives etc but that was further outside, near the charnel house where the bones and skulls were displayed.
Afterwards, we went to lunch in a Bedouin encampment. The meal was lovely and they had chairs etc for tourists to sit on. As we were getting back in the bus, a little girl came begging for food. We did have food left from the breakfast boxes and so everyone gave her some. The Bedouins of the area are very poor. Their biggest trades are camels, goats and people trafficking -- mainly smuggling Russian Jews into Isreal.There is a huge problem with illiteracy as the Bedouin often do not see a point of sending their children to school beyond the state required basics. Think Travellers or gypsies, a semi-nomadic people who are struggling with modern life. The Bedouin of the Sinai unlike their cousins further to the East have not had oil discovered on their land (although the guide did mumble something about oil being recently discovered when they were digging for weater). 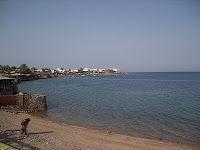 We then drove Dahab which is another big centre for the Bedouin as while as being a big backpacking and diving centre. The Bedouin do sell their handicrafts there. They are renown for rag rugs, think proggy mats. We did not buy any but had Egyptian coffee. Various Bedouin children scoured the beach for shells that they could then take back to their parents and have them turned into trinkets for tourists.

We returned to the hotel, exhausted about 8 pm.

Tomorrow -- Bedouins, camels and desert stars.
Posted by Michelle Styles at 6:41 am

Fascinating, thank you Michelle for sharing this.

Thank you for this, Michelle. What a fascinating experience. Sounds like you've had an amazing trip. Appreciate your sharing it.