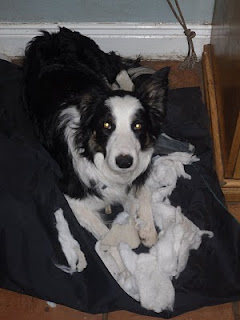 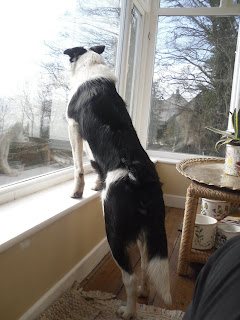 While we were away in Egypt, the puppies celebrated their birthday. Hardy chewed up his bed. Although I think Tess probably started it. The net result is now Chile the labrador and Hardy are sleeping on old towels while Tess gets the remaining bed. For some reason that bed has never touched.
It is hard to believe that they have grown so fast. They are still adolscents in many ways. Yesterday, they climbed through a hole in the fence and went into the neighbour's garden. Both emerging very muddy and smelly. They had baths which neither enjoyed. But they are now fit to be in the same room as humans!
They have very distinct personalities. Hardy is far more laid back than Tess. Tess is a dog who would wear high heels and generally run the entire show if she possibly could.
Posted by Michelle Styles at 7:02 pm

Where HAS the last year gone? Seems like yesterday when you told me you were going to get the pups!

Ah, baths. We have to do that tomorrow with one dog returned from kennels...

ONE YEAR OLD! Oh my goodness - where does the time go? Caroline x