Sinai Adventure Day 6 -- Into the desert 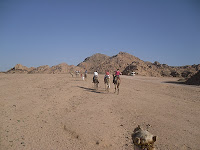 Our sixth day saw us going into the desert to have a meal with a Bedouin tribe. It included a camel ride, watching the sunset and looking at the stars. Originally we had wanted to go to Tiran Island but the boat trip did not come off and so we did camels instead.

The Bedouin of the Sinai are divided into about 19 tribes, although some say as much as 27. Each is headed by a sheikh. Sheikh simply means the leader and he really does the power of life and death over his tribe. Depending on the tribe, they live a semi-nomadic or a settled life. The government has built housing for them and there are a few local primary schools. As Bedouin life most revolves around camels and goats and to a certain extent tourism, the Bedouin are not renown for their adherence to education. Bedouins are v strict traditionalists and are Muslim. Bedouin women keep to the tents and cover up (although my daughter commented after suffering from sunburn, she could really see the point of wearing an all in one cover up in the desert!). It is the men and the children who interact with the tourists and the women stay in the houses. The Bedouin also operate on their own terms as they are a very independant people. Bedouin tribes are spread across the entire Middle East. The Bedouin of the Sinai do not have the oil like the Saudis or their Gulf cousins but it was mentioned that some oil had been recently found when they were drilling for water. 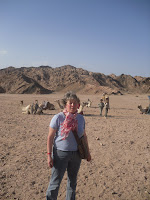 To ride a camel, get on like it is a horse. As the camel gets up, hold on to the pommel. Once a camel is up, let go. You can then either ride it like a horse or ride it like the Arabs do by hooking your left leg around the pommel. Personally I found hooking my leg was far more comfortable. Bedouin women ride donkeys rather than camels btw. The Bedouin children led the camels from the starting point to the camp.
The desert is still and sound carries. So total peace. You do feel as if you are riding on a timeless journey. 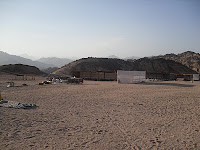 Once we were at the Bedouin camp, we were welcomed with cups of Bedouin tea. The tea is made from desert herbs and tastes like sage and honey tea. It forms a very important part of the engagement ceremony as it is the only chance for a Bedouin to say if she likes a man before they marry. Bedouins do not date and tend to marry very early 15/16. They also tend to marry within the tribe. The Bedouin have a very strict tradition of hospitality -- 3 days and that is all but for those three days, you are treated very well. After that, the guest is supposed to move on.
After the tea, the Bedouins brought out the shisha or water pipe. It smelt of apples. The last time I tried to smoke a cigarette, it was taken off of me as I was not inhaling. This time, I had a coughing fit. I much prefer the scent of a shisha to the actual smoking!
We then had lecture on the life of the Bedouin as we sat in the traditional goat hair tents with the flooring covered in rag rugs and pillows. My husband and youngest are keen birdwatchers and so did a spot of birdwatching. The Bedouin were very interested in the binos and after consulting the sheikh, several had a go at watching birds. 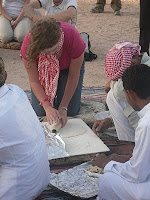 The Bedouin demonstrated how they made flat bread over the open fire. My daughter had a go. And then it was time for the typical Bedouin meal -- salads, grilled meat including kofta, a spicy potato thing and grilled chicken and of course the delicious bread. All washed down with water or a soft drink. We ate at low tables, reclining against cushions. 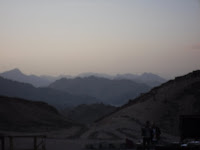 The sunset was spectacular and the entire canyon was lit up with different colours. The candles were then lit as there is no electricity. There is supposed to be no mobile signals either but much to the disgust of the man's wife, the other man in our group was able to find a signal for his Blackberry. Surround by nature, he had to check with the office. I really felt for her. The Bedouin seemed less keen on such devices than the binos.

After the sunset, the Bedouin demonstrated a few of their songs and dances in front of an open fire and then it was time for the stars. 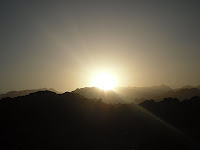 I will admit to being spoilt, living up in Northumberland where there is very little light pollution but I like looking at the stars in any case. And the Bedouin's enthusiasm for the stars reawakened my love of the skies. There is no electricity, and therefore no light pollution. As the man spoke, the full moon rose over the mountains. It was absolutely spectacular. They had good telescopes and so Saturn with its rings, the moon and the North star were on view. I had forgotten how good Saturn looks through a telescope.

We then drove back to the hotel. The desert looks fantastic at night lit by the moon. It was a pity that the other family were entranced by gadgets. There again, it was their loss. Personally I enjoyed tasting the Bedouin life. And would recommend the excursion for any visiting the Sinai.

Tomorrow -- a wooden yacht and snorkeling in the Red Sea.
Posted by Michelle Styles at 6:42 am