Ashes to Ashes -- the final season 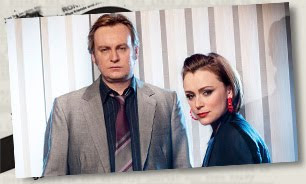 As anyone who has read this blog for awhile knows I am a long term fan of the series, starting with the first series of Life on Mars just after it came out in dvd. Gene Hunt (Philip Glenister) is what makes it. Totally unreconstructed alpha male. When I needed a Viking hero for Viking Warrior, Unwilling Wife he fit the bill and I thought I was odd. But then other women started coming out of the woodwork -- the reason they watched was Philip Glenister. It has to do with integrity and unswerving loyalty. He is a man who gets justice done but unconventional methods. Underneath his gruff exterior beats a passionate heart. He cares. An early episode where he discusses the merits of various biscuits with an elderly witness showed it. He is a man who hates bureaucracy and this is no bad thing.
It is why I knew that the people leading the Labour advertising campaign were totally out of touch when they tried to smear David Cameron by super-imposing his head on top of Gene Hunt's. People want a leader who leads. Far better to actually watch a show rather than just to assume.
Anyway, I am enjoying the ride and hoping the ending will be far more satisfying than the US version of Life on Mars -- no sleeping spacemen wanted! My fingers are so crossed that Gene Hunt and the rest of the team will keep their inegrity. And because it is supposed to answer questions from Life on Mars, I am hoping Annie will make a reappearance...
Ashes to Ashes means my Friday nights are booked up!

Then tomorrow, the new series of Dr Who starts properly. Matt Smith last week calmed my nerves. So hopefully he will do a good job. It was Amelia Pond who stole the show though.

And I understand there is a remake of The Prisoner starting on ITV1 on 17 April. James Caviezel, Ian McKellan and Ruth Wilson. star. Fingers crossed that it is good. It is not set at Portmerion though. And early reports are not good, but I want to see for myself.

Posted by Michelle Styles at 8:05 am

Email ThisBlogThis!Share to TwitterShare to FacebookShare to Pinterest
Labels: Ashes to Ashes, Dr Who, philip glenister, The Prisoner

Hi Michelle. I'm a late covert - I never wathched the last 2 series - shock horror. But I am hooked on this latest one. And like you I sooo want this series to have a satisfying ending. Last night's episode was stellar IMHO. Caroline x

I should have been home in time to see Friday's episode, but sadly was stuck on a shuttle from Milano Centrale train station to Milano Malpensa airport :o( Hopefully it will be repeated over the week so we can catch up!

Dr Who was v good, though. The Smilers - that was prime Moffatt!