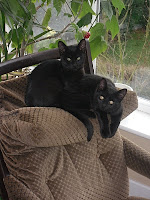 The kittens are in a climbing stage. Anything and everything. The ironing board is a particular favourite. They leap from the ironing board to the sofa and from there on to the curtains which they climb. Heathcliff was discovered swinging from the curtain. He was taken down more to his disgust.
The ironing board had been left propped up against a wall, ready to go downstairs. (There remains a question as to why my husband when he is finished doing his ironing can not take the board down stairs but that is a topic for another day) The kittens decided that it was just the right thing to practice climbing on. So they jump on the board and climbed to the top. The board slightly swayed. The kittens hung on. With visions of broken windows, lamps and furniture, I rescued them and removed the board to a safe place. The kittens were last seen trying to climb the cane begonia in the bathroom.
If these cats went outside, they would be the sort who climbed trees and forgot for while how to come down...

Hardy decided to visit ditches on his walk. Some were deeper than he thought but he felt it was his duty to explore them all. Tess, being a good girl, gave the ditches and her brother a disgusted look, staying well clear despite all Hardy's attempts to interest her in the game. Hardy became blacker and blacker, until he went into the last hole where his face became mud brown. Muddy water dripped everywhere but his tail wagged furiously.
Back home, he did not go off the lead but proceeded immediately to the bath. A bottle of puppy shampoo, four towels, and one soaked me, he emerged...a clean dog.
My husband threatens the same walk this evening...Thankfully there are no skunks in England.
Posted by Michelle Styles at 6:20 am