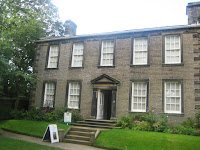 Yesterday, I drove to Haworth and the Bronte Museum. The trip from Northumberland took me through the very rainy but beautiful Yorkshire dales. There was an odd moment of panic when I took a wrong turn and discovered that I did not have my atlas with me. Luckily we recovered and eventually Haworth was found. It is quite easy once you know the right way!
There are several car parks in the town but luckily the one by the parsonage was not full.
In high summer, I should imagine the place heaves with tourists but yesterday, there were not many and so we were able to enjoy the Bronte house in peace. The rooms are far smaller than one might imagine from the frontage so it is no wonder thre is a sign -- house full come back in 10 minutes. 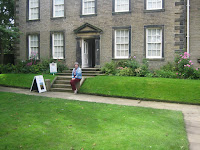 There are two exhibits on at the moment which are displayed in the rooms as well as the Bronte furniture. The exhibition of costumes from the recent ITV adaptation of Wuthering Heights adds to the atmosphere and one can learn a lot from it. The costume designer spent ages researching the costumes and she also made visual changes to show the character shifts. For example, Cathy's clothes become more pastel and less vibrant as she gets 'tamed' by Linton.
The other exhibition --Ghosts is of modern paintings of the moors hanging in the various rooms and that give a disconcerting note. They have spent a lot of time and effort to make the rooms be as they were in the Bronte's day and then hung these modern windswept landscapes.

Anyway, I loved their travelling desks with bits of sealing wax, pens and in Emily's case gummed puzzle acrostic labels. Charlotte Bronte was absolutely tiny - very small hands and feet. It is amazing that after her death, her dresses were cut up and sold as souvenirs. She also did not take kindly to critics. Her publisher refused to publish a preface as it was potentially libellous.
The gardens are planted in an early Victorian manner with plants that the Brontes would have known. 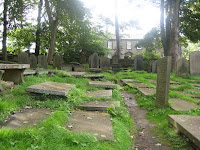 It is the setting of the house against the moors and graveyard that gives it atmosphere. The dining room where the sisters wrote overlooks the graveyard as does the old nursery cum children's study. Apparently at that time, the air was rank with decay and the greasy pools seeped up in the church floor. There were no trees in the graveyard. After the Brontes, measure were taken to aid in the decomposition of the bodies -- including lifting the gravestones to upright, planting trees and rebuilding the church.
The moors are great but the skyline has been spoilt by wind turbines.
We had a lovely lunch at the Apothecary Tea Rooms. The owner was wonderfully friendly. They had pictures of the Jenny Agutter movie -- The Railway Children as it was filmed in the area. On the weekends and daily during the summer, it is possible to take a steam engine ride along the railway.
It is definitely a place that I would recommend visiting as it does give insight and inspiration.
Posted by Michelle Styles at 10:23 am

We went to Haworth one autumn when daughter #1 was about 2. We had the parsonage pretty much to ourselves (and it is really small inside, isn't it?) and she discovered that if she let out an ear-splitting shriek it would echo all through the house. In the end dh had to seize her and take her outside to play amongst the gravestones while I lingered and read things.

I'd love to go back. Maybe daughter #1 would appreciate it more now!