The Lady Soldier is republished as an ebook 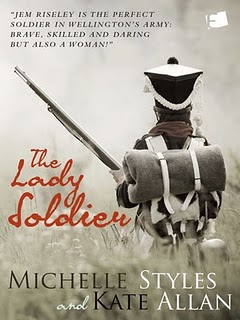 Embrace Books launches today with a huge party and The Lady Soldier which I co-wrote with Kate Allan back in 2004 is republished as one of the launch titles. A few of the steamy cut scenes have been put back in! Isn't the new cover wonderful?
The Lady Solider came about because Kate Allan who was my critique partner had an idea that wouldn't let her go on bright November morning in 2003. She thought about it all the way to work and emailed me asking if we could cowrite this book together.  I agreed as the subject matter was something very close to my heart. Ever since I read about Deborah Sampson in grade school, I had wanted to write something about a woman who pretends to be a man in order to serve as a soldier.
At that point in time, I had turned my back on romance and was trying to writ a Roman set thriller. Writing The Lady Soldier with Kate really reawakened my love of the genre and my determination to write historical romance. After writing the first draft of TLS, I wrote the first draft of The Gladiator's Honour.
TLS went through several incarnations (and rejections). And was eventually bought by Robert Hale and published in hardback in 2005. (On the day it was published originally I received my revisions for GH and became totally focused on building my career with HMB). Kate's path went in a different direction and among other things she is now a successful agent and publicist.
We reacquired the rights to TLS late last year as it went out of print. At the same time Kate had a launch party for her Polish set Regency. Jane Holland attended and bought a copy of The Lady Soldier. She stayed up all night reading it and asked if Embrace could publish it. Kate and I were delighted.
It is great to be part of the launch.
There are seven wonderful books and here's hoping that Embrace goes from the strength to strength.
Available wherever good ebooks are sold, including Amazon kindle.
Posted by Michelle Styles at 11:56 am

Hooray! It's a great story and wonderful that it's getting another go at publication!

And yes - the cover is quite lovely!

Congratulations Michelle - it looks fabulous and I've long wanted to read it. Am off to fill my Embrace trolley shortly!
All the best - Judy

Congratulations! That's a wonderful story and an absolutely gorgeous cover.

Congratulations Michelle! It's great, isn't it that The Lady Soldier is now available for ereaders.

Hi I came across this title recently and have been trying to find somewhere I can purchase the ebook from as all the links I've tried seem to be broken. Is it not longer available?

It is no longer available as the publishing company stopped doing ebooks. Kate Allen and I are looking into self publishing it in the near future.