How Jack Stanton came about

As several of you have been so kind as to say that you like Jack, I thought some might be interested to know how his beginnings.

Back in May 2006, I went down to lunch with editors. I was very excited as I had never been to The Offices before. One of the things an author gets to do is to see the Editorial Director if she is in. She is a totally lovely person btw. But my knees were knocking as she asked if I had ever written a story about an engineer. I had to say no.
At lunch, I mentioned the conversation to my senior editor and we got talking about Brunel and other Victorian engineers such George Stephanson and his son Robert. We also discussed how they wanted me to move on from Romans and write Vikings etc. I did mention that a self made man would make an excellent hero if handled properly. But felt at the time, I was being very politely urged towards Vikings.
A few days later, I received a phone call -- could I possibly make that Victorian civil engineer a Christmas story? And could it be in the North with more than a hint of the Industrial Revolution as Helen Dickson was doing hte companion piece set in the South? I said yes and began to do the research in earnest.
While I knew about North and South and Richard Armitage, I did not watch it until after the book was finished. This is mainly because I did NOT want to be influenced by it at all. There was a case of North and South being used in a M&B book and by an author in the early 1990s as source material and there were Consequences.
When I did finally watch it, I let out a huge sigh of relief because Jack could have been played by Richard Armitage. 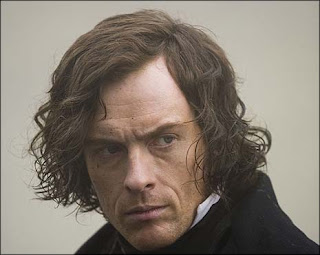 Actually at the time, I was more taken with Toby Stephens. The odd thing is that my current hero Simon who also is a self-made man type started off as more RA but appears to be transmogrifying into TS...Who knows.
But it was really that chance conversation with the Editorial Director that started it all. And civil engineers are such great heroes, particularly in the early Victorian era.
Posted by Michelle Styles at 11:27 am