Sold and Seduced in Australia 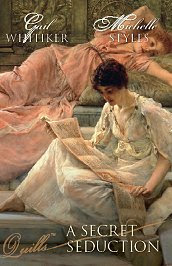 On the off chance, I happened to glance at Harlequin Mills and Boon Australia and there it was -- Sold and Seduced. It is being released under their Quills progamme. This time as part of a duo with Gail Whittiker -- called A Secret Seduction.
Romance Junkies gave Sold and Seduce a 5 ribbon rating and said Michele Styles is a much beloved historical author and SOLD AND SEDUCED is a prime example of the reason why her fans are so devoted. With characters so vivid you can see them in your mind’s eye and a plot that will keep you glued to the pages awaiting each battle of wills between Fabius and Lydia. There’s an undertone of some wrong doing from someone associated with Lydia’s father but we’re kept in suspense until near the end of the book. I loved the historical aspect to the storyline and was fascinated by the different types of marriage and Lydia’s horrified reaction to what she perceived as being forced into an archaic marriage. I have to confess I love how Fabius challenges Lydia with the kissing wager. There’s no doubt that it gets her thinking about kissing him constantly and actually seems to bring them closer rather than destroy their relationship.
You can read an excerpt from Sold and Seduced here.
And you can buy it here
Posted by Michelle Styles at 5:21 pm