The Penny Drops -- Wilding the Dene 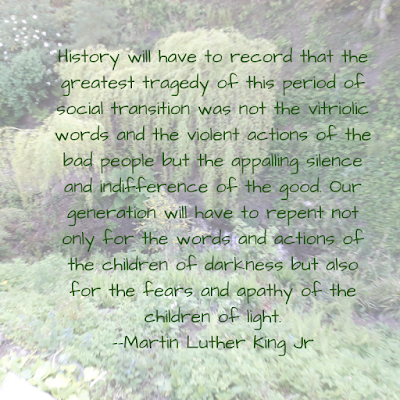 History will have to record that the greatest tragedy of this period of social transition was not the vitriolic words and the violent actions of the bad people but the appalling silence and indifference of the good. Our generation will have to repent not only for the words and actions of the children of darkness but also for the fears and apathy of the children of light.
--Martin Luther King Jr
I will number myself among the complacent about the environment. I like to think of myself as one of the Good – I keep bees, the last time the garden saw pesticide was probably 1996 just before we moved in, we have had a programme of making sure a good majority of the plants were  good for the bees since 2000 (starvation of colonies is real), and my hens and ducks have roamed free during the day since 1998. My various cats have been indoor cats since about the time Penny encountered a hen in 1998. We know we have foxes and so when Penny and Tuppence went, my husband suggested that we keep the next lot in. We recycle and try to avoid single use plastic and so on.  I can give loads of reasons why I thought I was doing enough including raising three children who were environmentally well (two of which work in the sector). I thought I could rest on my laurels so to speak. Other people maybe needed to change but me – I was good. After all I was doing my best and the less environmentally aware were the ones
The penny dropped last week.

I read Rebirding by Benedict MacDonald and realised that I had become infected with the new normal. I simply had not noticed the decrease in the bird and insect population. He gives an example of a fig tree  where hornbills just to go to feed and the clearing teemed with life and sound but one day the tree was cut down and the hornbills no longer visited the area. They may have found food elsewhere (if they were lucky) or they may have starved. However, people going to that clearing after the fig were greeted by silence. They had no idea that hornbills ever fed there. Their normal was not hornbills in a fig tree but a silent clearing where one or two other birds flickered about.
And suddenly I understood that I had been part of the complacent and the appallingly silent. I have also suffered to greater or lesser extent from Ecological Tidiness Disorder in my quest to a garden which is pleasing to the eye as well as supporting my bees.
MacDonald gives some very sobering figures of the decline in birdlife in the British Isles and the crash in the insect population. It is easy to forget in a world where one puts out bird food for the birds that different species have different feeding requirements. And for some, if they can’t find the insects, they starve. Insects are dependant on certain types of plants. They have evolved. Not all plants will host insects equally. Insects have spent  thousands of years evolving to feed off specific plants. When those plants are not there, they can sometimes adapt but sometimes they starve. And when they die, the birds who feed on them, do not thrive, go elsewhere where there is more competition etc. Because of research into migration and the mind maps birds carry, we are learning that it is not as easy as once thought to increase populations. For example, there is no point in building the perfect habitat for a pine marten in Sussex and hoping that one will appear – their range doesn’t include Sussex. And in dealing with animals, you do have to think range. Britain is on the Western edge of the range for many birds.
While it is depressing, MacDonald gives hope and that hope comes from the concept of rewilding. In short, making sure the environment is not managed for just one species, but rather looked at as an ecosystem as a whole. It is about working with nature, instead of against it. However, I don’t think he is much of a gardener or completely understands some of the trouble. It is not just the people who have paved over everything, have decking, and use pesticides at every opportunity who need to change, but also the people who garden for wildlife who have to change as well. We, the complacent good, must alter our behaviour to ensure things actually change.
Ecosystem gardening is actually far harder than it sounds and is why it isn’t usually practiced.  In one sense it is simply an extension of Beth Chatto’s philosophy of the plant to suit location but in another, you do have to be aware of what insects the plant will host etc. And it is gardening more for the longer term.
My youngest son who is currently a Master research student at St Andrews and is in Cyprus studying fledgling behaviour of the Cyprian wheatear and who has not read the book is so pleased that the scales have dropped from my eyes about the seriousness of the problem. Although, he did think it amusing I got in a totally unintentional twitter spat with Monty Don when I asked if Gardener’s World could try to make native plants aspirational rather than highlighting things like tree ferns. My intentions were good, but my wording was misconstrued. My son found out about it when a fellow researcher in Cyprus asked him if his mother’s name was Michelle. I got a phone call.
My son is an ornithologist rather than a plantsman and didn’t totally understand about  some of the ways in which the wildlife gardener  might have inadvertently assisted in the decline from sterile hybrids of native plants to the use of exotics which have evolved to support other ecosystems  to create sterile green deserts which look natural but are almost incapable of supporting any native fauna. He now does (sort of). This problem is also one environmental consultants in planning have been highlighting for years but one which has been overlooked by gardeners and gardener designers.

He suggested I read Wilding by Isabella Tree if I wanted to know more. It is an excellent book but had I read it first, it would not have had as big an impact as Rebirding as I would have thought – ah but I am one of the Good and her experience has nothing to do with me, really.  The calls to action are many and varied.
Wilding also made me feel better – much of what I am doing has been good. Actually better than good.  I can do with few more tweaks in my approach and losing of my ETD especially in pulling nettles and brambles (A sore point with my son. In his first year of uni, my son was once sent out to recover from a bad hangover and made to pull brambles while I dealt the state of his bed. He spent much of the time staring up at the sky as I had suspected he would) but on the whole the bones are there. I just need to look at the garden with different lenses.
The other good part is because the next door neighbours operate a more than begin neglect policy on their part of the dene and the public footpath goes through a strip of land owned by a mysterious trust which has not been touched for decades really, the natural haven where I garden actually has far more areas and is bigger than I first thought.
I have no intention of getting into any more spats or trying to provoke and see little point in trying to get the bad to change their ways (I leave that to others), instead I want to persuade and that is why I am going to devote part of this blog to writing about The Dene and my efforts at ecosystem gardening to create more of a haven for nature. I am going to detail the beginnings and what we have done, impart  how to garden with free roaming ducks and hens and still have a decent border and vegetable patch etc as well explaining about my efforts to be a better ecosystem gardener. One of my latest projects (forced by Hugh Buff-Orpington, our cockerel) has been to turn the old back lawn into an orchard under planted with wildflowers. In part because it can be so overgrown, I have hesitated to share but I think the time is right.
I hope this helps or inspires someone. There will still be bits about my own historical romance writing but I think this is a worthwhile project. So please bear with me as I give some insight into my attempts. I am going to make mistakes. I am a very flawed human being but my intentions are good. At the very least it will provide me with procrastination distraction from my latest wip which is at POS stage.
If you are interested in getting involved in Rewilding Britain, do visit their website to find out more.

Posted by Michelle Styles at 11:35 am