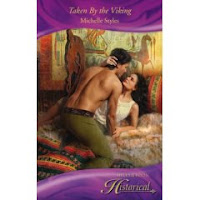 I found out yesterday that Taken by the Viking will be released in the US in May 08. They decided not to wait afterall until the entire trilogy had been completed.

I am tremendously excited about the title as it does encapsulate Lottie. According to my editors, it took a very long time to decide on the right adjective.

Now all I have to do is write the sequel to the one I just turned it.
Posted by Michelle Styles at 6:24 am

Email ThisBlogThis!Share to TwitterShare to FacebookShare to Pinterest
Labels: A Christmas Wedding Wager, An Impulsive Debutante, Taken by The Viking

Good title, Michelle - and excellent news on the US releases. :o)

Fantastic news Michelle. You must be SO excited. I wish you every success.

Don't hate me, but I could not help but laugh since my SpamFilter picked out this advert from Ellora's Cave this morning.

Go here to see the connection-

Congrats on the early US release, Michelle. Readers are obviously panting for your books!

And I love "impulsive". I might have to come up with a plot just to get that adjective in one of my own titles :)