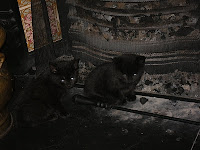 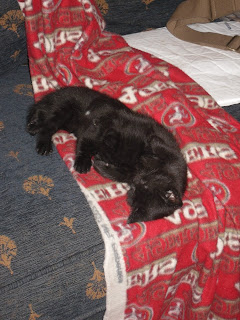 For a variety of reasons, my study has become kitten central. The kittens are mainly living in here while they get used to the big wide world and learn the intricacies of the litter tray.
The kittens are growing all the time and have discovered how to purr, chase balls and climb up the sofa. Heathcliff has also decided that Tess is a mobile scratching post and that sitting on my lap as I type is an excellent idea. Mr Darcy is a bit more refined. They have also decided in the absence of a lap, the 49ers blanket will do.

My daughter and I took the train to Newcastle to see Mamma Mia yesterday. The organisers of the show have thought about it and produced a brochure, giving train times, and finishing times of the performances. It is a five to seven minute walk from the station to the Newcastle Metro Arena.
Mamma Mia was excellent! Thoroughly enjoyable. At the start, there is a safety announcement for those of a nervous disposition -- white lycra and high heeled boots will be seen on stage!
The musical is slightly different from the movie and it was interesting to read that they have changed little bits to make the musical more accessible in each country that it plays in. For example, as the buses run on time in Toronto, they did away with the joke about you wait 20 years for a dad and three of them come along at once. The nationalities of the dads also change. In Australia, Bill Austin is Australian rather than being Scottish or Swedish as in the film.
Everyone could sing and special mention should be made of Kate Graham who played the high maintenance Tanya to perfection. The running order of the songs is slightly different and there are a few more songs in the musical version than in the movie.
The audience were dancing in the aisles by the end
I had thought the Arena might be bitter but it was toasty warm.
Anyway, Mamma Mia is highly enjoyable and was a fantastic Christmas treat. They have added an extra week and tickets remain available.
Posted by Michelle Styles at 7:16 am

They are gorgeous - and I envy you having two to play together! Of course Mr Darcy would be a little more refined than Heathcliff - but then I have to admit that sa kitten on my lap as I worked woud be very special. instead I have a crzy Floozie who is bored iwht being inside but hates the snaow and so is sitting on my keyboard, hunting the cursor on the screen