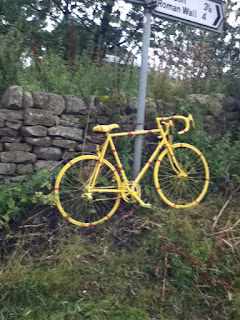 All around the village --  red and yellow painted bicycles have appeared. At  first it was a bit disconcerting, particularly the one at the entrance to the village, chained to a signpost. But it rapidly all became clear -- it is in celebration of the Aviva Tour of Britain which is passing through the village on 10 September. The red and gold are the colours of the Northumberland flag.
On Church Street, the lampposts are festooned with banners and the bunting is up. Further up the North Bank someone who was big into cycling in his youth has painted his front gate red and gold.
And the bicycles are everywhere.
My eldest who is up visiting from Cambridge was not so impressed with the bicycles as he is used to seeing them chained to every possible post there. Personally I think they look cheerful.
On the day, people are supposed to decorate their house etc. 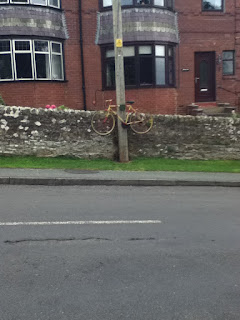 It is a nice idea but I think we will just go out and cheer the racers on. This section is part of the King  of the Mountain timed stretch. And I know how hard it can be to climb the North Bank. The Collies however will be staying inside. I suspect they will be annoyed that they were not consulted about people congregating outside their house and garden.
I suspect most of the visitors will be down in the village. The church is running a pop up cafe (when did they stop being called a coffee morning?) serving teas, coffees and cakes.
The road will be closed for two hours and people living on the route have to ensure their cars are off the road.
My eldest who experienced the Tour de France last year in Cambridge says that the cyclists flash past and it is all over in a matter of minutes.
Still it will be fun and it is not very often that something like this comes past the front gate.
Afterwards, people will be allowed to cycle up the North Bank without fear of cars for about an hour. (I always see lots of people pushing their bikes when they reach us)
Fingers crossed for a fine day.
It is being shown live on ITV4 in the UK with a highlight edition at 8 pm every day, plus it is also being shown around the world in a number of countries (including in the US)
Posted by Michelle Styles at 9:02 am

Email ThisBlogThis!Share to TwitterShare to FacebookShare to Pinterest
Labels: cycling, Tour of Britain