Falling off horses and other bits of extreme research 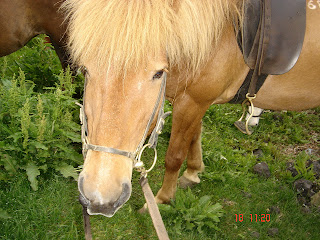 My post about Taken is up today at Unusual Historicals and Delia asked about research. This reminded me of the lengths I went to do my research for Taken by the Viking.
When I was in Iceland last year, not only did I visit museums, but I also went riding in the lava fields with Is Hestar. At the end of the 2 hour ride, the horse decided to make a run for the stable and I fell off. Totally my fault I should add, and the people running the stable were lovely. If anyone is interested in the Viking period, I would certainly recommend going to Iceland to ride one of the Icelandic horses. The horses are direct descendants of Viking horses and have an unusual gait.

I also tried on Viking armour and lifted a replica sword. The picture of my youngest, doing the same, mainly because my children objected to their mother having her photo taken. But I thought it was important to gauge the weight of a sword and how cumbersome a shield might be. This came in useful when I was writing the opening chapters of Viking Warrior, Unwilling Wife.
One of the great things about being a novelist is that it does give me an excuse to go out and try things.
Ho and hooray for England on beating the French. Jonny Wilkinson's boot proved golden in the end. But the game was very tense. And now, England are in the final. Can they go all the way? Certainly the 30 men of the squad think so.
Posted by Michelle Styles at 8:26 am

Email ThisBlogThis!Share to TwitterShare to FacebookShare to Pinterest
Labels: horses, research, Taken by The Viking, Viking