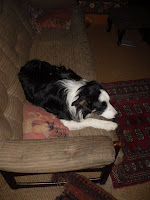 Hardy has taken to escaping from the garden. It is most annoying as he has been doing this even when I am out gardening or doing the hen and duck houses out. First I know about it, I see Hardy walking along the wrong side of the fence. He is on a public foot path BUT...
This is not good as some day he is going to get out on to the road and get knocked down. He occasionally lures Tess out with him, but after the Farmer's Wife incident where Tess ended up chained in the farmer's yard and Hardy escaped, she is a little wary.
Yesterday as my youngest and I cut brambles on the far side of the dene, Hardy suddenly went walk about. My youngest leaped over the fence and unceremoniously dumped Hardy back on to the right side. Hardy looked most put out by this.
Then Tess decided to demonstrate the hole in the water gate.
My youngest rolled a large stone down the bank. Instead of landing where he intended it to land, the stone picked up speed, bounced into the air, flew over the water gate and landed half way up the bank on the other side. My youngest was sent to retrieve it. This time he managed to carry it to the hole and fix it.
Hopefully Hardy's career as an escapologist is now ended.
His career of sleeping on the sofa has also ended and he is not allowed, but does try...as the photo proves.
Posted by Michelle Styles at 12:00 pm

I love visiting your blog, Michelle and have nominated you for a cute award. Hope you enjoy it. mayabauthor.blogspot.com

Have a lovely day.