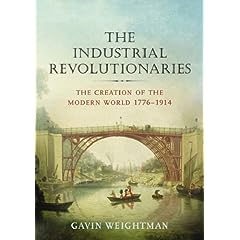 I now why my eldest kept telling that the Industrial Revolutionaries was never in at The Lit and Phil. My dh managed to procure me a copy for a Christmas present.
It looks wonderful and seems to be absolutely brimming with ideas for stories.
For example, early 18th century England was full of spies. Not political spies but industrial spies who wanted to acquire the technology for their own country.
Or then there is the story about the American *Robert Francis* who demonstrated the torpedo to the British Navy. The process took rather long but finally, the ship imploded. Robert Francis is much better known by his real name -- Robert Fulton.
And then there is Marc Brunel and Sophie Kingdom. Sigh. Happy sigh. As well as the railway men who I already know lots about.
Gavin Weightman is interested in the transfer of technology between countries. He has sections on how the US and Britain cooperated and about the Great Exhibition. The US delegation apparently did not take up the space allocated, much to initial amusement, but then all were impressed with the efficiency of the Americans products. He also has a section about Japan. So it promises to be an interesting read as well as a whistle stop tour around the various countries.

I shall also be looking out for his other book on the Frozen Water Trade during the 19th century. This is the story of how one man shipped ice across the Atlantic. The Frozen Water industry collapsed in the early 20th century because of the rise of artificial coolants.

But I do have my wip to finish first. And my editor who is indeed lovely might get a bit upset if I get distracted.

Posted by Michelle Styles at 7:25 am

Ooh - now this looks like the sort of book my DH would enjoy hugely. (So would I.) Hmm...

Hope your deadline is going well. Mine is... um... getting distracted!