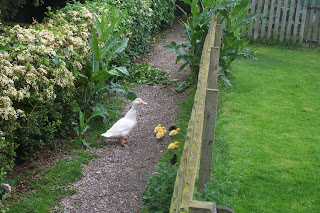 As Kate hardy requested it, this is a photo of the ducklings from mid June. They are slightly less fluffy now and are about the enter their dinosaur stage.
Imelda the bad mother duck is standing guard. She is pathetic. And of course the ducklings have no sense at all. They are apt to become lost/over waterfalls/fall down ravines or just run off the lawn peeping their little heads off as Imelda finishes that one last preen.
I have also discovered Grose's Dictionary of the Vulgar Tongue. It is where the upper class slang spoken in the Regency comes from. The members of the Varment club first popularised it. Byron and Sir Godfrey Webster founded the Varment club when they were at Cambridge. I don't know quite why anyone thinks Cambridge students were more serious than Oxford students in those days...Men were regularly sent down from both places. Byron obtained his degree from Trinity mainly by staying the course and simply being there. Idleness, debauchery and drunkedness seemed to have been the order of the day.
Still I was intrigued to discover the actual dictionary. The bucks and dandys were speaking an argot that was several years out of date. I wonder if this caused great mirth in the thieving faternity as these men attempted to slum it.
Posted by Michelle Styles at 11:02 am

I doubt many people in the lower layers of London's society noticed what a few Cambridge students were doing, let alone the so-cold nobility.

Some of the slang both in Grose's theiving dictionary and also in that of Nathan Bailey has found its way into mainstream British English at least.

Fab pic of the ducks, Michelle. Thanks for posting.

As for the cant... I saw a brilliant production of The Alchemist last year, and the 'fighting boy' was shown as upper-class Englishman trying to copy black rapsters (language and mannerisms). Hugely funny, very apt - and also exactly the same as what you're describing in the 1800s, and it was the same for contemporaries of Jonson.

You might also be interested in Jonathan Green's book 'Slang Down the Ages' - that's so interesting to dip into.

Yes, I agree that probably few in the lower layers of society noticed, but it is a curious feature that one finds in society time and again. The whole conce[t of slumming of it.
For example, in the late Roman republic, Clodia Metelli sets fashion with her use of plebian vowels. Marie Antonette with her idealised shepardess etc. was also a form of the same thing.
You see it again in the Regency. And again to today.
It always makes me think of the scene from Animal HOuse where the Delta House goes on the road trip and ends up in a nightclub, sticking out like sore thumbs.
And yes, some of the slang from 1736 is still around today which goes to show how appropriate the words are...

I've just realised why the Bad Mother Duck is indeed the BDM.

Yes, Imelda is so named because she is far more interested in her feathers and being preeened properly than her ducklings. Except if any other duck get annoyed with her, then she rapidly pretends she is interested in the ducklings...
Hence she is a BMD.