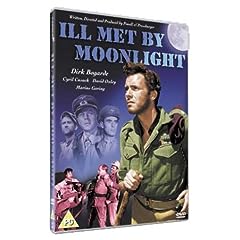 Last night the BAFTAs were on. Life On Mars only won the audience BAFTA. Which goes to show that there are a lot of dedicated fans out there. Philip Glenister, looking very dapper in his dinner jacket announced the winner for the Best Actress. John Sims looked very uncomfortable when the BestActor was announced. My heart went out to him. It is so hard to sit there for those few seconds before the winner of an award is actually announced.

However, I spent most of the evening watching one of my favourite films -- Ill Met by Moonlight. I happen to like it because it is a true story and has some lovely footage of Crete. We have decided that we need to go back to Crete. The movie is based on the recounting of W Stanley Moss about his adventures in kidnapping a German general. He was ably aided and abetted by Patrick Leigh Fermor, Xan Fielding and a whole hot of Cretans. It was most the Cretans who were responsible for the success of the mission. PLF is one of my favourite no fiction writers. He has a wonderful gift of the English language. His books about travelling across pre WW2 Europe on foot depict a vanished age. If you have not yet read him do. Another book based around the same incident is The Cretan Runner and it too is a wonderful Boys Own adventure story. Anyway, the film is very enjoyable -- all the more so for being based on a true incident.
When we were in Crete lo those many years ago, it was obvious that WW2 had marked the island. At the monestary, the priest told the story of how the Germans tried to take the piece of the true cross and were unable to get the plane off the ground. Shades of Indiana Jones here. The priest rapidly changed the subject when two Germans joined the tour!
Work wsie -- the wip is going fine. My crows of doubt seem to have flown for the moment and I am concentrating on getting the draft down. I keep telling myself -- the sooner it is down, the sooner I can actually work with it and make it better. I do think I was correct to basically begin again as I think the overall story will be much stronger.
Posted by Michelle Styles at 3:39 pm