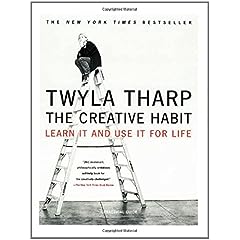 Anne McAllister's blog should come with a warning: You will discover interesting and intriguing books that will cause you to visit Amazon. Her latest discovery is Twyla Tharp's The Creative Habit.

Twyla Tharp, in case anyone is unfamiliar with her work, is one of America's great choreographers. She is exacting, demanding and above highly creative in her medium. She has choreographed ballets, Emmy winning television shows and Tony winning musicals.

I thought the book sounded interesting when Anne described the rituals, and the thinking out of the box. I knew I needed to read the book when Anne mentioned ruts.

It arrived yesterday and is well worth reading. And yes, okay, I am creative. I like making connections. I do like the act of creation. I like change.

There is a lot to absorb. Little throw away sentences that suddenly open up new vistas. She writes of the discipline needed for creativity. Of scratching around for ideas -- scratching in terms of looking everywhere, like one scratches off lottery cards in the hopes of finding something. She also speaks about not mining too deeply in one place, and the combination of ideas. She also speaks of skill. Her stories about Mozart and DaVinci are not new, but they are in one place. ...the better you know the nuts and bolts of your craft, the fully you can express your talent. Build on solid foundations. Skill enables you to execute your vision.

I love her quote from John Gregory Dunne explaining the difficulties of writing novels and each new novel is a tabula rasa, and he has to remember how to get characters in and out of rooms.

She also speaks of casting, and getting the right person for a part. Justifying that.

I knew that I did not have the right person in mind for my hero. I have known about him for a while. but I couldn't think who I would cast as my hero. Which actor would I chose to play him? What quality does that actor capture? My usual cast of suspects was not working. I asked Anne for some ideas. Anne is very good with ideas btw. She came up with two. One I had already rejected. The other -- I had not even thought about. I did not recognise the name -- Mads Mikkleson.

He played Le Chiffre in Casino Royal. The minute I realized -- I knew that he had the quality of movement that I was looking for. Things fell into place. Horizons opened. I will have to change some of the things I have already written but it is going to be a better book.

It is a magnificent book. Full of sound advice. Or maybe because it tallys with my thinking, I find comfort in the reaffirmation.

Twyla Tharp is another one of those -- desire, dedication, determination and discipline ladies.

All I can say is get the book, read it and absorb it. I know I will be returning to it time and again.
Posted by Michelle Styles at 9:58 am

Darn you. I still have the McKee on my wish list and now this. SIGH.

Glad the book has made such an impression, Michelle. May it continue to inspire.

Donna, I would take this over McKee, but everyone finds their inspiration in different places. So you might find McKee more valuable. It's very personal.

As for Mads, Michelle, change whatever you need to. He'll be perfect. Enjoy!

Back to being a tortoise.